IndiGo aiming to be #1 in Indian domestic market; latest Airbus order could grow fleet to 250 aircraft by 2025 The recent announcement from Indian low-cost carrier IndiGo that it had signed a Memorandum of Understanding for 180 A320 series aircraft (although its honour of becoming the launch customer for the A320neo was short-lived as it was replaced by Virgin America) may have come as a surprise to many as the carrier already has some 60 Airbus aircraft waiting to be delivered from an order it made at the Paris Air Show back in 2005. The airline’s current fleet of A320s stands at 34 according to the airline’s website, each equipped with 180 seats.

In 2010, IndiGo carried just over eight million passengers on domestic routes, up from just over six million in 2009. Having launched flights in August 2006, the airline will not be eligible (under Indian aviation regulations) to operate international services until August 2011. Since its inception the carrier has handled over 22 million passengers. 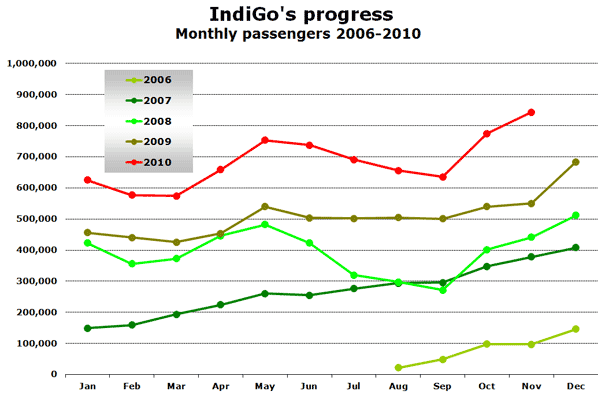 In November, the airline carried over 800,000 passengers for the first time in its history. This gave it a 17.3% share of the Indian domestic travel market. This means that it has now overtaken Indian Airlines for the first time to claim third place in the domestic market behind Jet Airways (19.2%, or 26.2% if you include JetLite), and Kingfisher (19.1%). Just published figures for December show that IndiGo’s market share has risen still further to 18.6%, tied with Kingfisher and now ahead of Jet Airways (17.7%), though with its JetLite subsidiary it has a combined 25.4%. 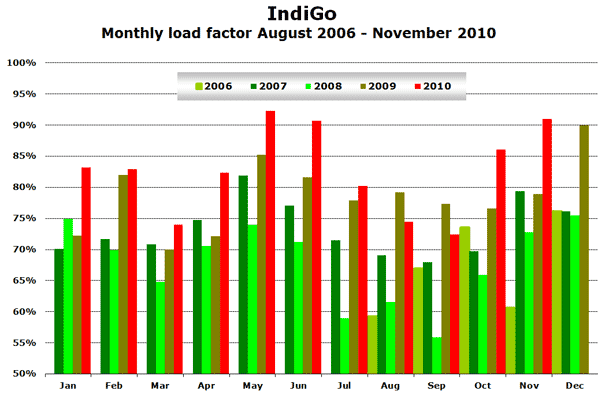 This January, IndiGo is operating over 1,500 weekly departures from 24 airports across India. A total of 62 non-stop routes are operated, with 54 operated at least daily. The leading route in terms of weekly flights is between India’s two busiest airports, Delhi and Mumbai, where the carrier operates seven daily flights, with an eighth frequency starting at the end of January. 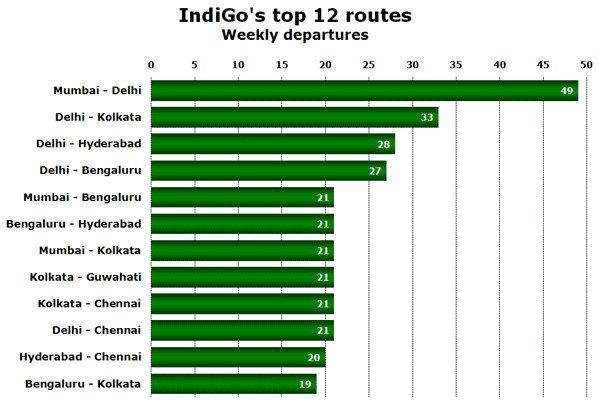 The Bengaluru – Kolkata and Delhi – Bengaluru routes will also get an additional daily frequency from the end of January.