Famous face: Miss Ghana, Mimi Areme, graces the launch of Virgin Atlantic’s Accra service in May – its first new route out of Heathrow (where it has surprisingly few slots) since Mauritius in October 2007. Network-wise Virgin Atlantic is very unusual for a major European airline: no short haul or alliance feed, and focused only on cherry-picking fabulous long haul routes…except it has never been very profitable.

Earlier this month, Virgin Atlantic’s CEO Steve Ridgway was appointed Chairman of the Association of European Airlines for 2011, replacing, maybe somewhat ironically, Willie Walsh of British Airways. Ever since Virgin Atlantic started operating in June 1984, the two airlines have enjoyed, at best, a mixed relationship, especially once Virgin Atlantic was able to gain access to London Heathrow and start competing head-to-head with British Airways on their lucrative US routes.

For the last four years, Virgin Atlantic has carried between five and six million passengers on routes to the USA, the Caribbean, Africa, Asia, the Middle East and even Australia (via Hong Kong). Passenger numbers have fallen slightly in each of the last two years as the airline’s network has remained relatively stable. 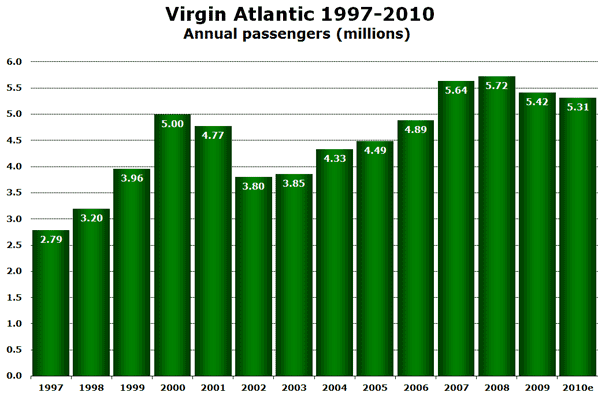 80% of flights from Heathrow this winter, remainder from Gatwick

The airline still operates from both main London airports, although almost 80% of its flights this winter are from Heathrow from where it operates non-stop to 17 destinations of which seven are in the United States (seasonal Chicago services re-start in May). However, these US routes account for over 50% of all Heathrow flights and over half of all of Virgin Atlantic’s Heathrow seat capacity. 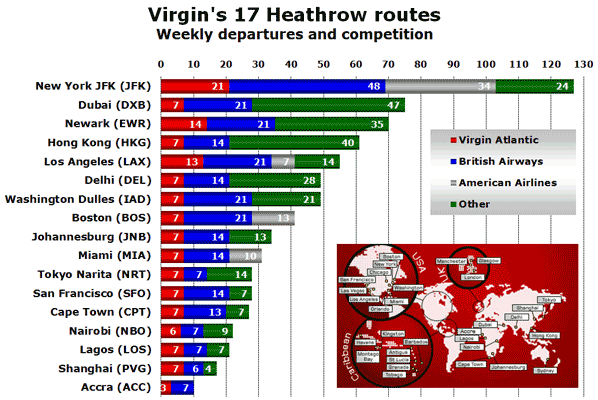 Virgin Atlantic competes head-to-head with British Airways on all 17 of its Heathrow routes and with at least one other carrier on 16 of them. The only routes served more than daily in winter are New York JFK (three flights per day), and Newark and Los Angeles (both served twice daily). This winter the airline’s nine routes from London Gatwick comprise Las Vegas and Orlando in the US, and seven Caribbean destinations.

Virgin Atlantic’s shortest non-stop sector from Heathrow is to Lagos in Nigeria (5,000 kilometres) while the longest is Cape Town (almost 9,700 kilometres). Despite the significant difference in sector lengths, a snapshot of air fares reveals considerably less variation than might be expected. anna.aero identified the cheapest return air fares (in Economy class) for two travel periods; one imminent (not including a weekend) and one at the end of March (which does include a weekend). 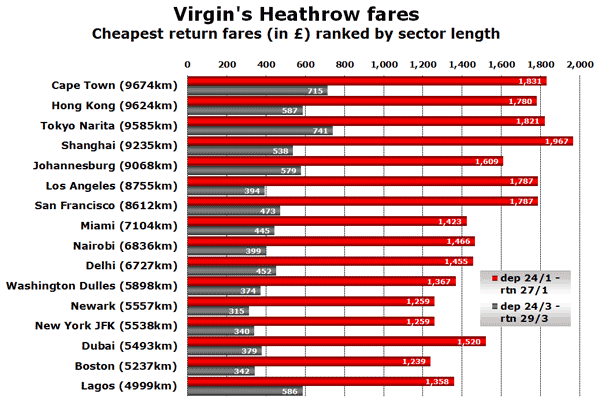 The results have been ranked by sector length, thus highlighting any routes that are either particularly cheap or expensive given the distance involved. For imminent travel, there would appear to be a fare premium on flights to Dubai, Lagos and Shanghai, while Johannesburg would appear to be good value. For a long weekend break at the end of March, Los Angeles is also a good buy while Lagos (maybe not really a long weekend break kind of destination) is quite pricey, suggesting this route is highly focused on business traffic.

What does the future hold for a 26-year-old Virgin?

Despite its (ambivalent) 49% ownership by Star Alliance’s Singapore Airlines, Virgin Atlantic does without membership of one of the three global alliances and therefore relies primarily on point-to-point traffic, despite the confusing presence of the other “Virgin” branded airlines in the US and Australia (and in other places at various times in the past). Over the years, a merger/partnership with bmi was often mooted, as bmi’s domestic and European network could help feed Virgin Atlantic’s long-haul routes, and vice-versa. But now bmi is owned by Lufthansa. So would Lufthansa be interested in Virgin Atlantic?

A bit like another German company, VW, Lufthansa has been busy acquiring smaller airlines in recent years, but has so far shown little obvious interest in Virgin Atlantic. Surprisingly, Virgin Atlantic’s slot portfolio at Heathrow is relatively small at just 3% (about the same as SAS and less than Aer Lingus) compared with bmi at around 8% and Lufthansa at just under 6%. Whatever happens, anna.aero (whose offices are quite close to those of Virgin Atlantic) will be analysing the results with interest.