Singapore Changi celebrated its 40-millionth passenger in mid-December – the first time it has achieved the figure in a single year. The lucky passenger, Jonathan Shih, who arrived on a Singapore Airlines flight from Shanghai, won the chance to go on a 40-minute shopping spree at the airport, during which he was transported in a specially decorated buggy and selected items totalling S$40,000.

Singapore’s multi-award winning Changi Airport turns 30 this year and celebrated by passing the 40 million passenger mark in mid-December for the first time. By the end of the year the airport had handled over 42 million passengers, up 13% on 2009, while aircraft movements were up just under 10%. Full-service and low-cost carriers both reported growth in demand in 2010, as the region’s economies recovered much faster than in Europe or the Americas, from the global economic downturn in 2008/09. 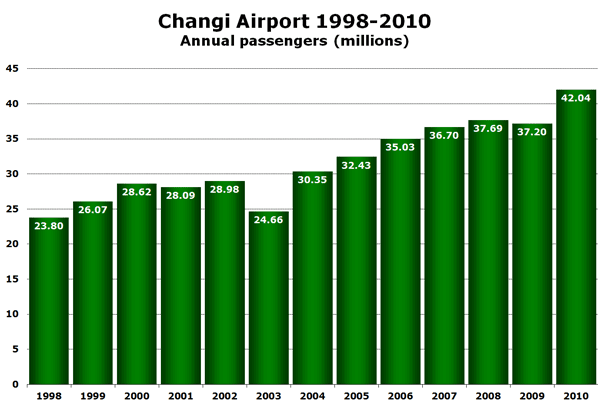 Singapore Airlines and its wholly-owned subsidiary SilkAir are the two leading airlines at Changi, followed by three of the region’s biggest low-cost carriers; Tiger Airways (in which Singapore Airlines has a significant share), the AirAsia group of airlines, and Jetstar Asia (in which Qantas has a sizable stake). 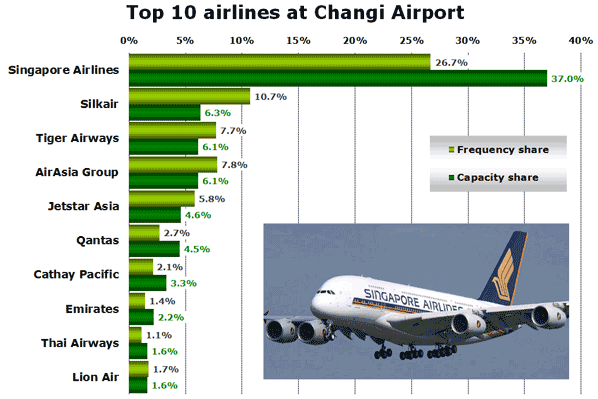 According to OAG schedule data, Indonesia remains the leading country market for flights to and from Singapore. Malaysia and Australia are vying for second place while Thailand and China round out the top 5. According to the airport, in the first 10 months of 2010 the country ranking based on passenger numbers was Indonesia, Australia, Malaysia, China and Thailand. 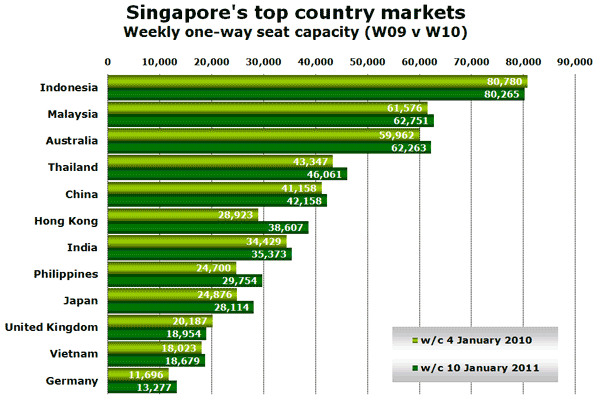 One country market to have seen significant growth is Hong Kong. The number of weekly flights has increased from 91 to 130 thanks to additional frequencies from Cathay Pacific and Singapore Airlines plus the entry into the market of Tiger Airways in February, which now operates three daily flights. This week has also seen the addition of Hong Kong Airlines with a daily A330 service, bringing the number of carriers on the route to six. According to the airport, this brings to 102 the number of airlines operating at Changi, and is the second new airline of 2011 following Air Macau, who launched twice-weekly flights to Macau on 3 January.

A total of nine airlines commenced operations at Changi for the first time during 2010 including Southeast Asian Airlines (SEAIR) to Clark in the Philippines and Transaero to Moscow. Other newcomers welcomed at the airport were Airphil Express (to Cebu and Manila), Berjaya Air (to Tioman), Hainan Airlines (to Dalian via Hefei), and Mandala Airlines (to Balikpapan and Jakarta). Several airlines have already announced new routes to and from Singapore in 2011.

anna.aero’s Editor Ralph Anker will be chairing and moderating a number of sessions at next week’s Low Cost Airlines World Asia Pacific conference at the Grand Hyatt in Singapore. For more information see http://www.terrapinn.com/2011/lca/SPK-mr-ralph-ANKER.stm.