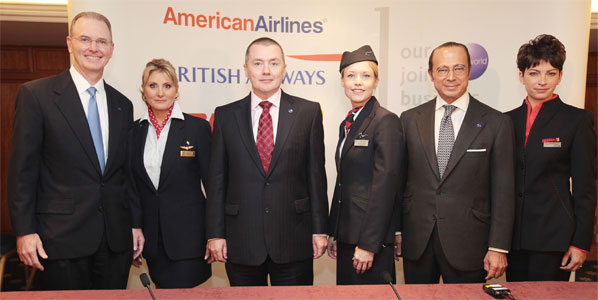 After British Airways’ anti-trust immunity approved transatlantic cooperation with American Airlines and Iberia began in October – here seen celebrated by AA’s Gerard Arpey, BA’s Willie Walsh and Iberia’s Antonio Vazquez with crew – the British oneworld carrier has boosted capacity to the US. In June, the airline will also relaunch its San Diego service.

Latest figures from the UK Civil Aviation Authority indicate that passenger traffic between the United Kingdom and the US fell for the third year running in 2010. Passenger numbers fell to below 16 million for the first time sine 1997 as demand slipped by 3.3%. Traffic is now over 17% below the peak of 19.2 million achieved in 2000. However, London Heathrow to US demand remained stable at 12.35 million passengers, with London Gatwick traffic falling almost 13% from 1.73 million to 1.51 million. Demand from UK regional airports also declined. As a result, in the last three years, Heathrow’s share of the total UK-US market has grown from 62% in 2007, to 70% in 2008, 76% in 2009 and now 78% in 2010. 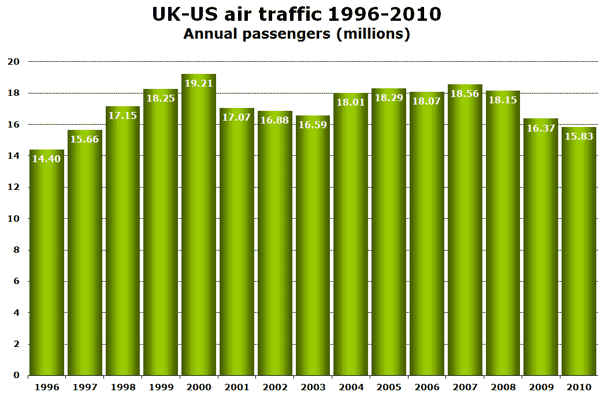 Back in 2008, several US airlines were finally able to switch their flights from London Gatwick to London Heathrow, but this has apparently done little to improve demand for transatlantic services between the UK and US.

No new routes since last February

A year-on-year comparison of seat capacity for February reveals that five of the seven UK and US carriers have increased capacity in February 2011 relative to 2010, while US Airways remains unchanged. Only United has cut capacity, but this is more than compensated for by the increase in capacity from its new merger partner Continental which has increased frequency on its Newark to Heathrow service from three daily flights to five.

In terms of individual routes, there have been no changes among these seven airlines. All non-stop routes operated last February are still operating this year revealing that capacity increases have come from a mix of higher frequencies (as with Continental) or the use of bigger aircraft. British Airways in particular has upsized many of its transatlantic services from 777s to 747-400s while also adding an additional frequency to its New York JFK and Newark services. 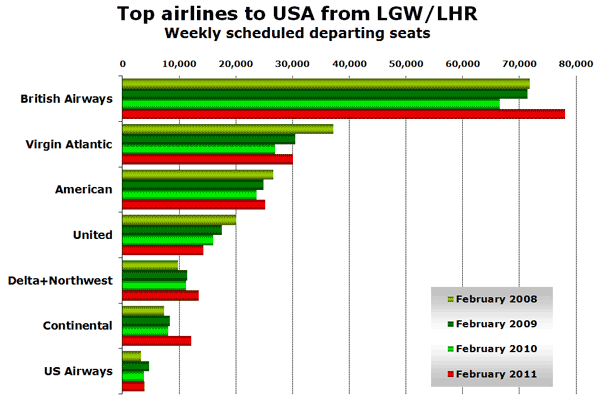 For this summer United is cancelling its seasonal Denver to Heathrow service and using the Heathrow slots for an additional Washington Dulles service instead. From 1 June British Airways will be resuming non-stop flights to San Diego, and from the start of the summer season Delta will be launching daily flights from Miami to Heathrow and double-daily flights from Boston to Heathrow. Another change is that Sun Country is doubling weekly frequency (from one to two) on its summer seasonal Minneapolis/St. Paul service (which operates via a technical stop in Gander) and moving it from London Stansted to London Gatwick.

As a result of all this activity passenger numbers between the US and UK should rise in 2011, despite the increase in UK Air Passenger Duty.