Aegean/Olympic merger denied due to domestic dominance; but how monopolistic are other domestic EU markets?

Well, yes, this merger would have been rather dominant, taking over 96% of Greek domestic route capacity. Presumably, Air France’s 80% command of the French market is the acceptable benchmark…

Last March, anna.aero took a close look at the route network implications of allowing Aegean and Olympic to merge. We highlighted how dominant the combined entity would be in the domestic market, but revealed that on international routes from Athens, only one of the top 30 (as measured by weekly departures) would become a monopoly (Tirana). Eleven months later and the European Commission has decided to block the proposed merger primarily because of concerns about how the merged entity might abuse its dominant position in the domestic market.

But how much more dominant would the ‘new Olympic’ be in the Greek domestic market than other flag-carriers in their domestic markets across Europe? Using the latest schedule data for the first week in February, the market share (by seat capacity) of the three leading airlines in the top 11 European domestic markets was determined. 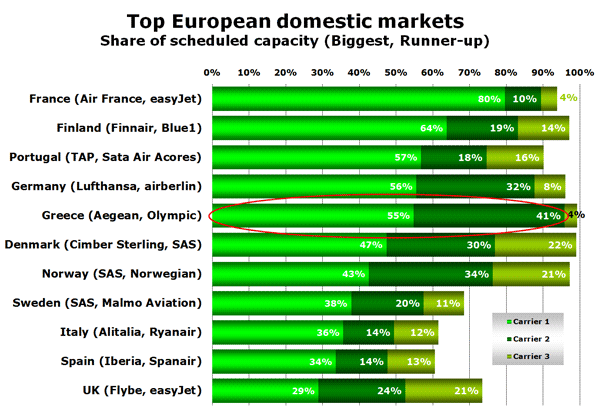 At present, the most dominant airline in a domestic market is Air France, which has 80% of domestic seat capacity, making it eight times bigger than its nearest rival easyJet. Of course, Air France claims that this ‘dominance’ is not as great as it seems thanks to the domestic TGV high-speed rail network, which it says provides ample competition.

Greece is currently the eighth-biggest domestic market in Europe after the big five (France, Germany, Italy, Spain and UK), Norway and Sweden. It currently ranks fifth for dominance with Aegean having a 55% share of the domestic market. However, when combined with Olympic, this would rise to over 95%, making it over 20 times larger than its nearest (and only) competitor, Sky Express, a small regional carrier based in Crete, which offers virtually no flights to and from Athens. As for competition from ground transportation, this would come from slow ferries in many cases rather than high-speed rail. Ironically, Aegean/Olympic were probably not helped by the demise last September of Athens Airways, which offered a range of domestic flights using primarily smaller Embraer jets. It would be interesting to know if anyone at the European Commission has been tasked with keeping an eye on domestic Greek air fares to ensure that competition is taking place between the two major carriers.

Unlike Air France, which has determinedly hung on to its dominant position in the French market, British Airways ranks only third in the UK domestic market, well behind both Flybe and easyJet. If British Midland International and its subsidiary bmibaby are combined, the bmi Group would have almost 13% of the UK market, making it the fourth carrier to have at least 10% of the UK domestic market.

In Spain, five carriers (Air Europa, Iberia, Ryanair, Spanair and Vueling) each have at least 10% of scheduled seat capacity. In Italy, there are four carriers with at least 10% shares, although this is slightly misleading as it includes the Air One branded flights that are really under the control of Alitalia. Combining all the separate Alitalia brands and operating names actually gives the airline a 52% share of the Italian domestic market.