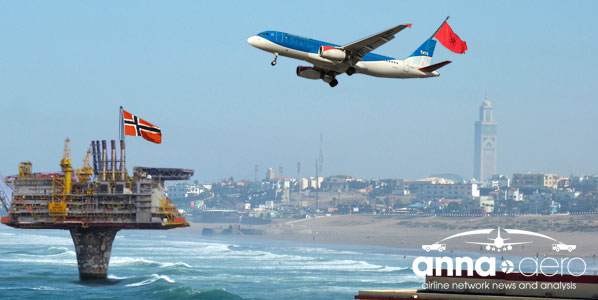 Sun and oil: In addition to bmi’s newly announced services to Morocco, there is an oil industry focus with the new services to Norway’s Bergen and Stavanger as well as Tripoli in Libya.

London Heathrow’s second biggest carrier, Lufthansa-owned British Midland International (bmi), is continuing to refine its network strategy for the coming summer season. This week, it announced that it would be axing London Heathrow to Glasgow services from the start of the summer season. The route, which is operated up to seven times per day, is one of five domestic routes operated by bmi from Heathrow, the others being Aberdeen, Belfast City, Edinburgh and Manchester. Although only five of bmi’s current 20 non-stop routes from Heathrow are to domestic destinations, they account for 55% of the airline’s flights at London’s busiest airport.

Not giving up slots

However, the axing of the Glasgow route does not mean that bmi is reducing its presence at Heathrow. The airline announced that it would be starting new daily flights to Bergen and Stavanger (both in Norway) as well as adding a daily service to Morocco, split between Casablanca (four-times weekly) and Marrakech (three-times weekly). The airline is also launching flights to Basel (in co-operation with fellow Star Alliance member Swiss), which will operate three times each weekday, as well as adding a second frequency to its Beirut service. In addition, daily flights to Tripoli begin on 21 February, clearly signalling that Lufthansa intends bmi to maintain its strong position at Heathrow, but with some network alterations.

Competition from London on all four routes

All four of bmi’s new destinations are served from one or more of London’s airports this summer. The decision to compete head-to-head on the Stavanger route with Star Alliance partner SAS may seem a little strange.

Wolfgang Prock Schauer, bmi’s CEO, said: “London Heathrow is the home of bmi and as the second largest airline at Heathrow we will continue to offer our customers attractive business and leisure destinations. To meet the clear demand for further growth, we are offering new direct services to Norway and to Morocco which builds on our network strategy to focus on international routes whilst still providing key domestic connectivity to London Heathrow. These enhancements reflect bmi’s network strategy to have a stronger focus on international routes.”