Senegal’s new national carrier Senegal Airlines instantly launched six routes with its two A320s last week. The new airline has, however, caused a diplomatic dispute with Belgium as Brussels Airlines has been disadvantaged.

The recent launch of flights by new national carrier Senegal Airlines has resulted in a bit of a diplomatic incident with Belgium, after the Senegalese government revoked Brussels Airlines’ rights to operate onward connections from Dakar to destinations in Gambia, Guinea and Sierra Leone. Brussels Airlines had been operating daily flights from Brussels with onward connections to Banjul (three times weekly), Conakry (twice weekly) and Freetown (twice-weekly). The Belgian ambassador to Senegal has now been recalled to discuss future options.

This year, a new airport is scheduled to be completed in Senegal’s capital city Dakar. The existing airport already offers long haul services to two US destinations, six European airports and Dubai in the Middle East.

The country’s main airport in Dakar (Léopold Sédar Senghor International Airport) handled an estimated 1.7 million passengers in 2010 (Source: Fraport), up almost 10% on the 1.55 million that passed through the airport in 2009. This ranks it just inside the top 20 of busiest airports in Africa. A new airport is being built which should open some time in 2011. German airport group Fraport has been awarded the contract to run the airport for over 20 years once the airport is operational. Work on the new airport began in April 2007.

A significant development in 2010 came with the introduction of five-times weekly services by Emirates from Dubai, enabling connections to and from a wide range of destinations in Asia.

Senegal Airlines up and running 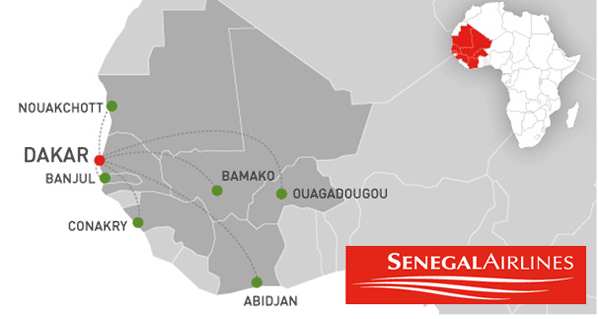 A new national carrier launched at the end of January with two A320s. Majority owned by local private investors, the carrier began operations serving six destinations in West Africa. The airline is a replacement for Air Sénégal International, which collapsed in 2009. The new carrier partners with Emirates in providing regional feed to the carrier’s Dubai route. The airline’s CEO is Edgardo Badiali who has previously been in charge of MyAir (in Italy) and GoAir (in India).