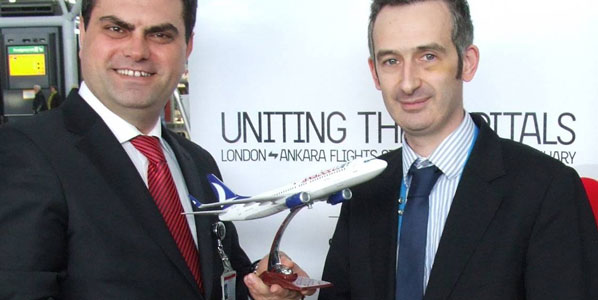 This week saw the launch of Turkish Airlines’ low-cost arm AnadoluJet’s second route to London Stansted, reaffirming the London airport’s low-cost focus. The Turkish market has grown with several new routes in the last year and this summer, the airport will be connected with seven routes to the country.

The phenomenal growth of low-cost airlines in Europe really began in the UK in the 1990s. One of the key facilitators for this was that the huge metropolis of London was served by four major airports, two of which were operating well below their capabilities. As a result, when easyJet was launched in November 1995 it was from London Luton airport, while Dublin-based Ryanair focused on London Stansted as its biggest operational base. When British Airways launched its low-cost subsidiary Go in May 1998, it too chose London Stansted airport as its main base.

As a result, traffic at the Essex airport with the Norman Foster designed terminal boomed and between 1994 and 2006, traffic grew seven-fold from 3.3 million annual passengers to 23.7 million, making it the third-busiest airport in the UK after Heathrow and Gatwick. 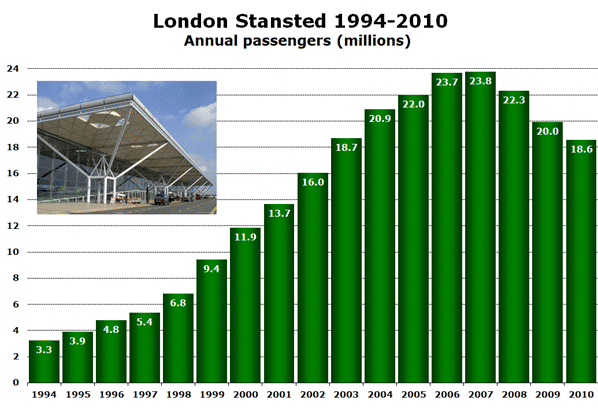 However, in the last three years, passenger numbers have fallen by 20%, as easyJet (which bought Go in 2002) has focused its London growth at Gatwick and Ryanair (which acquired Stansted-based, KLM-owned Buzz in 2003) has cut the number of aircraft based at the airport for a variety of reasons. However, these two carriers still account for almost 90% of seat capacity at the airport.

A closer look at the busiest routes at the airport reveals that Dublin stands head and shoulders above all other international routes with over 700,000 annual passengers. Spanish beach destinations Alicante and Malaga rank second and third 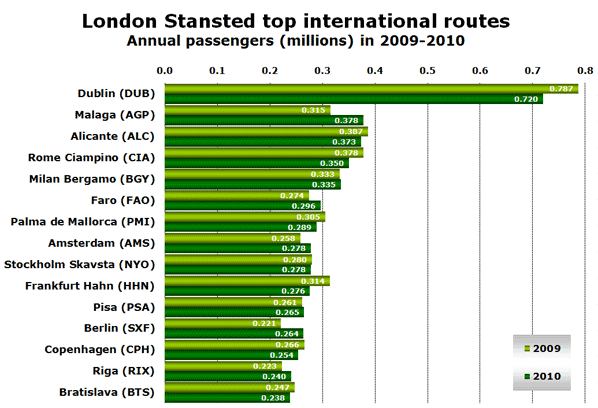 A number of domestic routes including Belfast City, Belfast International, Edinburgh, Glasgow International and Prestwick all saw traffic volumes of over 250,000 in 2009. anna.aero has previously examined Ryanair’s operations at the airport and easyJet’s operations, but which other carriers have (or have had) a presence at the airport in recent years?

The rise and fall of airberlin services

airberlin saw an opportunity at London Stansted and began ‘City Shuttle’ operations from a number of German airports in September 2002. In December 2005, it even launched domestic flights to Belfast City, Glasgow and Manchester, but these were abandoned at the end of the 2007 summer season. The number of destinations served by airberlin at Stansted peaked at 12 in the summer of 2006, but has fallen gradually in recent years. The number of routes will fall still further next week when airberlin’s Hannover and Nuremberg services are re-allocated to London Gatwick, leaving just Düsseldorf, Münster/Osnabruck and Paderborn services operating from Stansted this summer.

Other European LCCs have also been attracted to Stansted. Currently, Lufthansa’s low-cost subsidiary germanwings operates multiple daily flights to Cologne/Bonn, Hannover and Stuttgart and will overtake airberlin to become the airport’s third-busiest scheduled carrier this summer. Another major European LCC, Norwegian, began serving Stansted from Oslo in June 2003. Further routes were added to Bergen and Stavanger (April 2004), Trondheim (November 2004), Kristiansand (November 2006), Tromsø (December 2007) and Rygge (March 2008). All of these services have now either been terminated or moved to London Gatwick. 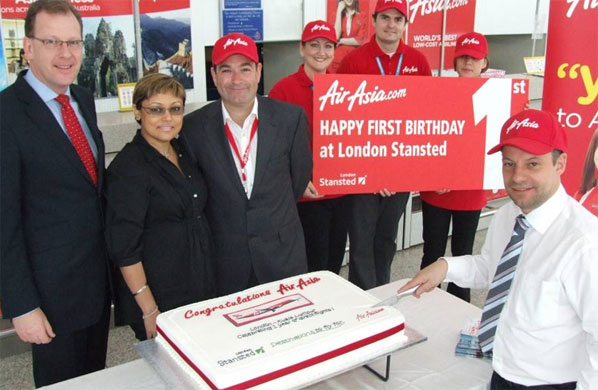 AirAsia X’s low-cost route from Kuala Lumpur will have operated for two years next month. Stansted’s only long-haul route follows a series of previous attempts with full-service as well as premium carriers.

Stansted has had several attempts at securing transatlantic services. American Airlines has tried at least twice to make it work while the airport was also the chosen London airport for MaxJet and Eos, a couple of “business” airlines that operated between 2005 and 2007/08. Last summer, US services returned briefly when Sun Country Airlines began a weekly service to Minneapolis/St Paul using a 737-800 with a technical stop in Gander.

More successful has been the arrival of AirAsia X, which began long-haul, low-cost flights to Kuala Lumpur on 11 March 2009. Last year, the route generated almost 170,000 passengers with many making onward connections with AirAsia’s extensive low-cost network in Kuala Lumpur.

Despite the downturn in passenger numbers in recent years, the airport continues to welcome new services from a range of carriers. Last year, the following new services were launched.

This week has seen the start of a new service to Ankara operated by Turkish Airlines’ low-cost subsidiary AnadoluJet and there are several other new routes already announced for 2011.