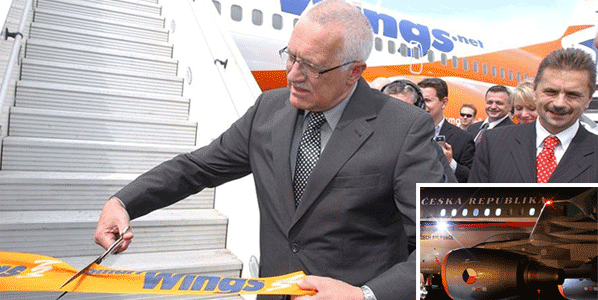 Czech president Václav Klaus endorses SmartWings – Central Europe’s answer to Margaret Thatcher is unsurprisingly a passionate fan of low-cost travel for the masses. Prof. Klaus himself is a refreshingly intellectual critic of climate change, which he compares to communism, and therefore prefers to travel in style aboard his own air force A319 (inset). 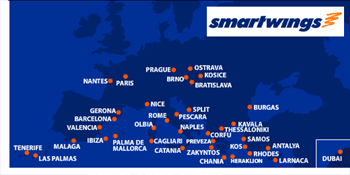 SmartWings was launched as a low-cost scheduled airline by Czech charter airline Travel Service in May 2004. It operates two SmartWings branded 737-500s (with 131 seats) but also uses Travel Service 737-800s during the peak summer season. This summer, the airline is adding four new destinations (to Antalya, Nantes, Nice and Pescara), bringing the airline’s total to 29. The airline’s main focus is on destinations in and around the Mediterranean, which results in extremely seasonal demand. This summer’s route network from Prague is summarised in the table below.

The leading country markets by weekly flights are Greece (33), France (25), Spain (22) and Italy (16). During August, the airline operates 119 weekly departures from Prague. The only destinations served at least daily during the peak summer season are Antalya, Burgas, Heraklion, Palma, Paris and Rome. The Paris route, which SmartWings serves with an impressive three daily flights, is keenly contested as Air France (three daily flights), Czech Airlines (four daily flights) and easyJet (daily flights) all compete for passengers. Prague airport recently revealed that 738,000 passengers travelled on the Prague – Paris route last year, making it by far the most popular route from the Czech airport.

A number of ‘city-break’ type destinations have been served in the past including Amsterdam, Brussels, Dublin, London Gatwick, Madrid and Milan Bergamo. However, none of these airports are in the airline’s route network this summer.

Up until 2009, Travel Service’s majority shareholder was the Icelandair Group, whose share of the business was 66%. In June 2009, the share capital was increased and Icelandair Group’s share was reduced to 50.1%. On 25 November 2009, it sold 20.1% to Canaria Travel, a Czech company, leaving it with a minority stake of 30%. According to Icelandair Group’s 2009 Annual Report, it is willing to sell its remaining stake in the company.