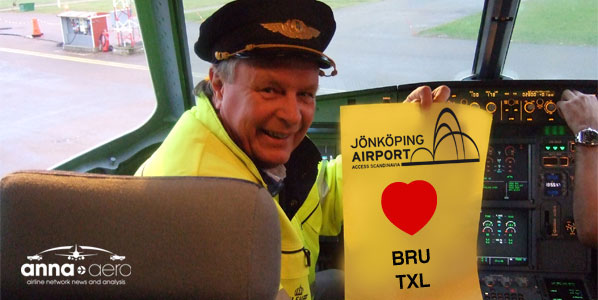 Jönköping’s airport director Hazze Sandström is delighted about Skyways’ international expansion at the Swedish regional airport: “Great destinations, great aircraft and a reborn Skyways. This is a product that will do really well with both business and leisure passengers.”

The Swedish regional carrier Skyways is under new ownership and again merged with the operational entity Avia Express. At the start of the summer season, the airline is expanding its network internationally and increasing capacity on selected domestic services. With 50-seat ERJ-145 aircraft that will be added to the fleet, Skyways will grow its network with an additional six destinations; five international and one domestic.

The airline recently pulled out of Stockholm’s city airport Bromma, from which it used to operate two routes, and now concentrates its services to the Swedish capital at the main airport Arlanda. From there, the airline will begin serving three Norwegian regional destinations; Bergen three times daily, Stavanger twice daily and daily to Trondheim.

Bergen and Trondheim services, as well as a relaunched twice-daily domestic service to Sundsvall in the north of Sweden, are routes already served by SAS, however, the two airlines are codeshare partners as of 1 February and will consequently jointly offer higher frequencies.

Jönköping in south-central Sweden, which Skyways currently serves from Stockholm Arlanda, will become the airline’s new home base and as such gets new international connections to both Brussels twice-daily and daily to Berlin Tegel. This expansion is particularly noteworthy as Skyways currently does not operate any routes outside of Scandinavia.

This is the second time Jönköping, which currently has no international services, is connected with an airport outside the Scandinavian region. The first time was with Transeast Airlines, which operated services from Riga between 1993 and 2001. Although frequencies suggest that the two new Skyways routes to a large extent target business travellers, German second-home ownership is very high in south-central Sweden, providing further support for the Berlin service.