David Meers, Vision Airlines’ SVP, spoke in Louisville as the airline launched an Atlanta service in December. At the end of March, the airline will also begin operating two Florida routes to the Kentucky airport, making it the second-biggest destination in its network. 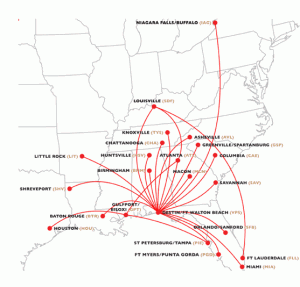 The US carrier Vision Airlines, which traditionally has performed mostly charter operations with its diverse fleet of 737s, 767-200s and Dornier 328s, is going through a strategy change. It is increasingly focusing on becoming a scheduled low-cost carrier in south-eastern US, using part of its fleet.

With an atypical low-cost carrier fleet mix of 737-400s and Dornier 328s, Vision Airlines’ scheduled operations will primarily be based at Northwest Florida Regional Airport (VPS; not to be confused with the new Northwest Florida Beaches International Airport, ECP) at Fort Walton Beach, an airport that currently only offers regional hub feeder services as well as two already launched routes on Vision Airlines; from Miami and Niagara Falls.

From the end of March, Vision will offer low-frequency services to an additional 17 destinations out of Fort Walton Beach and will at the same time launch a thrice-weekly connection between Fort Lauderdale and Louisville. The Kentucky airport becomes an important destination for the airline with an entire three routes. The new Fort Walton Beach operations are summarised in the table below.

The airline’s new strategy has been compared to the Allegiant Air business model, but Vision Airlines will notably be offering shorter average sector lengths, predominantly within the American South and even within the state of Florida. The capacity offered by the Vision Airlines’ Florida network is only a quarter of that of Allegiant, which makes Vision rank as the 12th-largest domestic airline in the Florida market, ahead of Virgin America, but behind AirTran.