Brian Cowen, Taoiseach (Prime Minister) of Ireland, opened Dublin Airport’s Terminal 2 in November. Since then, Aer Lingus has gradually moved over its operations to the brand new terminal and today, the airline operates its first long haul service out of T2, to Chicago, as the airline seeks to regain last year's fall in passenger numbers.

This week has seen Aer Lingus reach an agreement with its cabin crew, which should enable the airline to get back to the more important task of returning the carrier to consistent profitability as it gets used to operating from its new home in Dublin’s futuristic Terminal 2. Passenger numbers on the Irish carrier fell by 9.6% last year to 9.71 million, with long-haul (US) traffic down 15% to 907,000 and short-haul (European) traffic down 9% to 8.8 million. Load factor increased 2.1 percentage points to 77.8%, primarily thanks to a six point improvement in long-haul load factor (to 78.2%) as a capacity (ASK) reduction of 24% was met by an 18% reduction in demand (RPK). 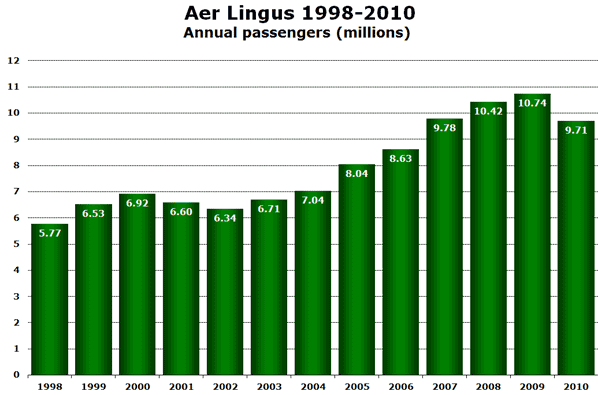 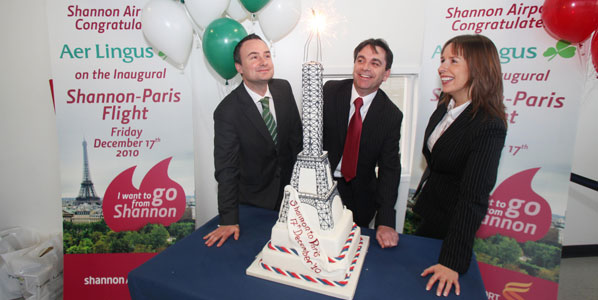 Analysis of schedule data for this week reveals that Dublin (not surprisingly) is the airline’s busiest airport with almost 500 weekly departures to 46 destinations non-stop. Two other Irish airports, Cork and Shannon, rank third and fourth but are both beaten by London Heathrow, which Aer Lingus serves from Belfast, Cork, Dublin and Shannon. With over 80 weekly departures, the Dublin-London Heathrow services is by far the airline’s busiest single route. 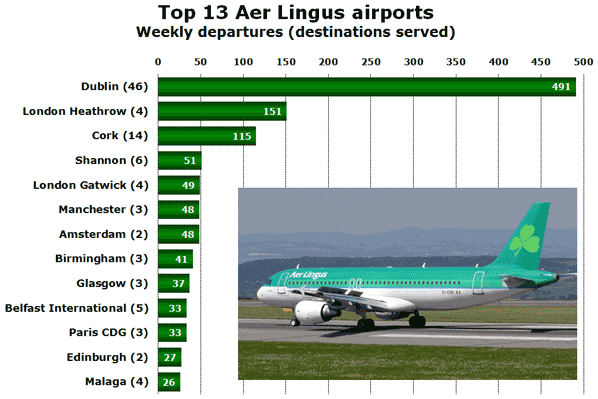 A total of just 52 airports are served by Aer Lingus this winter, with Amsterdam, Paris CDG and Malaga the leading airports in mainland Europe. Of the 52 airports, all but five are in Europe, the exceptions being Agadir (in Morocco) and Boston, Chicago, New York JFK and Orlando in the US. The US network has been cut back considerably in recent times with the loss of non-stop flights to Los Angeles, San Francisco and Washington. However, an Aer Lingus A330 is used by United Airlines to serve Madrid from Washington.

Intense competition with Ryanair at Dublin

Of the 46 routes that Aer Lingus operates from Dublin this winter, 24 of them face either direct (same airport) or indirect (nearby airport) competition from Ryanair services.

A recent development has been to use Aer Arann ATR 72s to operate under the Aer Lingus Regional brand. This arrangement began last summer and this summer, the turboprops will be operated from Dublin on UK routes to Aberdeen, Blackpool, Bristol, Cardiff and Glasgow, as well as some of the Edinburgh flights and all of the flights to Rennes in France. Routes to Doncaster/Sheffield and Durham Tees Valley that operated last summer proved rather short-lived. One of the new routes added to the Aer Lingus network last year through the Aer Lingus Regional partnership with Aer Arann is the service between Dublin and Blackpool, 220 kilometres across the Irish Sea.

To better understand the competition on major routes between Aer Lingus and Ryanair, anna.aero collected some fare data on a basket of 11 destinations from Dublin. Basic fares (including most fees and taxes, but not baggage fees or booking fees for Ryanair) were collected from both airline websites for travel outbound from Dublin as late as possible on Friday 11 February, returning to Dublin as late as possible on Sunday 13 February. 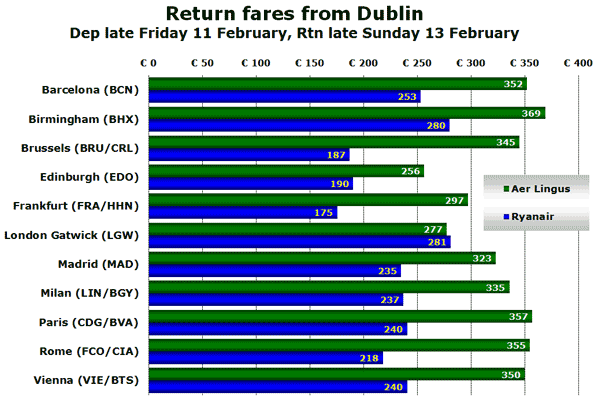 Across these 11 routes, Ryanair’s basic return fare was, on average, 30% lower than Aer Lingus’ return fare, with Aer Lingus cheaper on just one route (London Gatwick). As usual, it should be stressed that this is just a snapshot across a limited number of routes at just one particular point in time, but even so, it gives a useful indication of the typical fare differential between the two carriers on their most competitive routes.