Ralph Anker, anna.aero Editor, who produced this analysis, should declare a bias. He was Head of Network Planning at Go when it started the Stansted-Newcastle service in November 2001, a few months before Go (and Anker) were acquired by easyJet. Besides the need for capacity shifts, the route may have also fallen victim to taxes, which in turn have made it uncompetitive with rail. (Portuguese Prime Minister José Sócrates, easyJet’s CEO Carolyn McCall and Lisbon Mayor António Costa announce the 2011 base launch)

Europe’s second-largest low-cost carrier reported passenger numbers of 49.7 million in 2010, up 7.9% over 2009. The airline’s load factor also climbed 1.2 points to 87.2%. In January, passenger numbers were up 8.5%, resulting in the rolling 12 month total passing 50 million for the first time. Last month, the airline reported that it expected losses in the first half of its financial year (October to March) to double compared with the previous year as a result primarily of higher fuel prices, but also due to winter snow disruption (especially in the UK) and ATC strikes in other parts of Europe, notably Spain. As a result, the pressure is on for the summer season (April to September) to deliver improved profits to adequately compensate for the disappointing first half performance. So how much is easyJet growing this summer and where is it adding (and taking away) capacity? 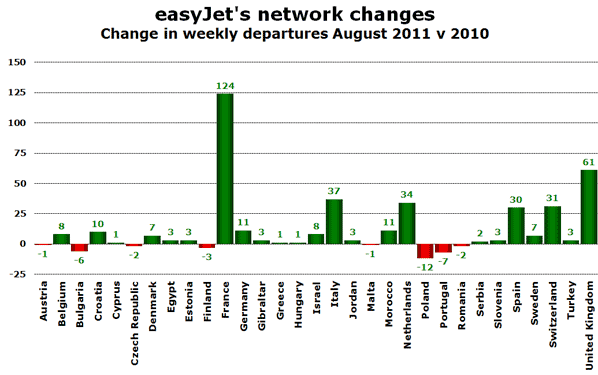 Taking the first week of August as a benchmark, the number of easyJet flights this summer is currently 4.5% above last year’s level, representing an increase of 368 weekly departures. A total of 524 routes will operate (up 37 on last summer), but the average weekly frequency across all routes continues to fall, from 8.3 in August 2010 to 8.1 this August.

Out of 31 country markets served (Jordan is new for 2011), the number of flights has been reduced in just eight, with Poland taking the biggest hit. The biggest increase in absolute terms is in the French market, which sees an increase of 124 weekly departures, representing an increase of 13%. The 61 additional flights in the UK represents modest growth of just 2%, while the 34 additional flights in the Netherlands (Amsterdam) represents growth of 20%. 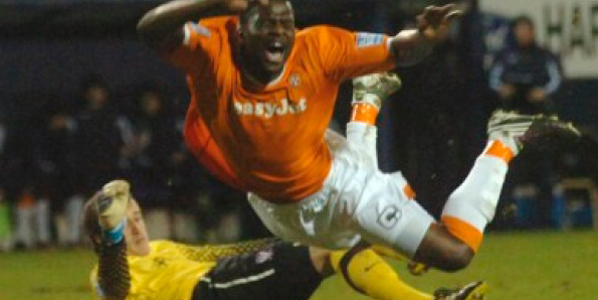 Not hurting, not working: easyJet has planned its summer routes for a better second half after weather-affected winter losses. The summer schedule represents a 4.5% rise on last year’s (August) level, including a net 37 extra routes, although average weekly frequency continues to fall, from 8.3 to 8.1 this August. Luton (where easyJet sponsors Luton Town FC) has faired not too badly in the capacity shifts, merely losing Krakow services.

In terms of individual airports, easyJet’s summer network has expanded from 114 to 124 airports with the addition of 11 new airports and the removal of one (Doncaster/Sheffield). Four of the top 10 fastest-growing airports (in absolute terms) are in the UK; London Gatwick leading the way followed by Manchester (fourth), Liverpool (seventh) and Edinburgh (ninth). Three French airports also make the top 10, notably Paris CDG (second), Lyon (eighth) and Toulouse (tenth). The remaining airports in the top 10 are Amsterdam (third), Barcelona (fifth) and Geneva (sixth). 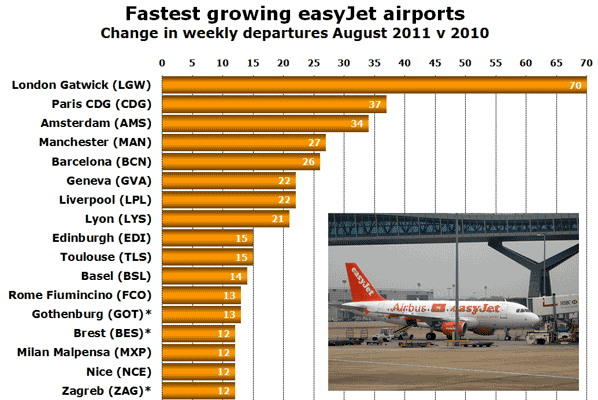 Lower down the top 15 are Gothenburg, Brest and Zagreb, none of which were served by easyJet last summer. Of the 11 new airports for summer 2011, six of them (Brest, Dresden, Fez, Gothenburg, Luxor and Zagreb) welcomed their first easyJet flights during the current winter season. The completely new destinations for summer are Amman, Bologna, Izmir, Seville and Verona. All five of these destinations will first be served from London Gatwick. Bologna is not completely new as easyJet inherited a London Stansted service when it acquired Go in 2002, but the route was terminated at the end of the summer 2005 season. The new London Gatwick service begins at the end of March.

UK airports still account for one-third of all easyJet departures

This August, easyJet’s top 12 country markets account for 95.3% of all departures, the same as last August, but there have been some subtle changes. The UK’s share has fallen 0.8 percentage points to 34.7%, while France’s share has grown 0.9 points to 12.4%. 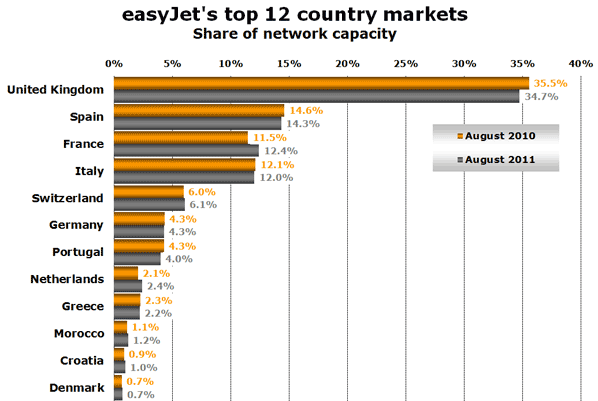 Considering the size of the air travel market, easyJet is underrepresented in Germany which accounts for just over 4% of its flights, considerably less than Switzerland, and only just more than Portugal. Portugal is likely to overtake Germany next summer as easyJet has indicated that Lisbon will become its next base later this year.

London Gatwick to Malaga route offers most seats this summer

Thanks to the allocation of some of the airline’s larger 180-seat A320s to the route, the London Gatwick to Malaga routes will offer more seats than any other easyJet route this summer. However, in terms of weekly flights, it just lags behind Liverpool to Belfast International, which offers 43 weekly departures. A total of eight routes are served with more than four daily flights and these are listed in the following table.

Six of these eight routes are from London to Mediterranean ‘beach’ destinations, highlighting the airline’s ongoing reliance on UK originating leisure traffic for its summer profits.

While easyJet is curiously coy about revealing which routes it drops, anna.aero’s analysis of OAG data and easyJet’s online booking tool reveals that at least 18 routes that operated last summer will not be served this summer. These are summarised in the following table.

The highest profile casualty is the double-daily service between London Stansted and Newcastle, two of easyJet’s UK bases. This route was started by Go in the aftermath of ‘9/11’ when Gill Airways folded. Initially started with two daily flights, a third was quickly added. When easyJet inherited the route in 2002, they continued to develop it and by the summer of 2007, the route was served up to five times daily. However, the following season, frequency was down to three per day and then just two per day in 2009 and 2010. The route appears to be a victim of the increased APD (Air Passenger Duty) in the UK and improvements in the alternative rail services.