1,000th and 1st: As All Nippon Airways’ took delivery of the 1,000th 767, Boeing’s VP and GM of the 767 programme, Kim Pastega, said: “This milestone is a credit to every employee who had a hand in building 767s over the past 30 years.” The American manufacturer also unveiled its new 747-8I at an event attended by 10,000 guests, including first customer Nico Buchholz, Lufthansa Group’s EVP Fleet Management (and a former student of anna.aero’s editor Ralph Anker), who revealed the German carrier’s 386-seat configuration.

In the last two years, almost 2,000 aircraft have been delivered by the two major manufacturers Airbus and Boeing. However, many of these aircraft deliveries have been concentrated to a limited number of airlines, of which the top recipients are revealed in the charts below. 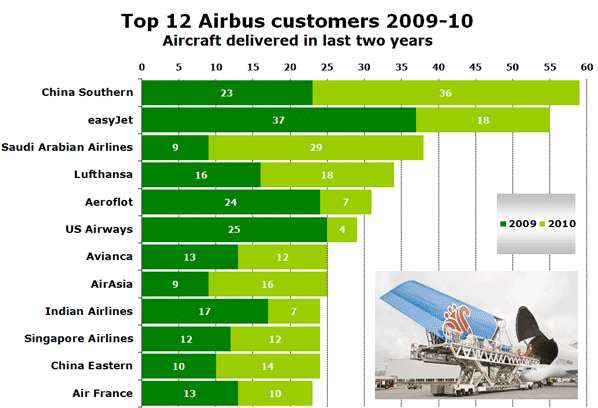 Although easyJet took the most Airbus aircraft in 2009, deliveries slowed down in 2010 and the European low-cost airline has been overtaken, both for 2010 and the two-year period, by China Southern. The Chinese SkyTeam member will continue receiving Airbus aircraft in the coming year, most notably its first A380. In spite of modest delivery numbers in 2009, Saudi Arabian Airlines’ rapid fleet renewal in 2010 has taken the airline to third position. 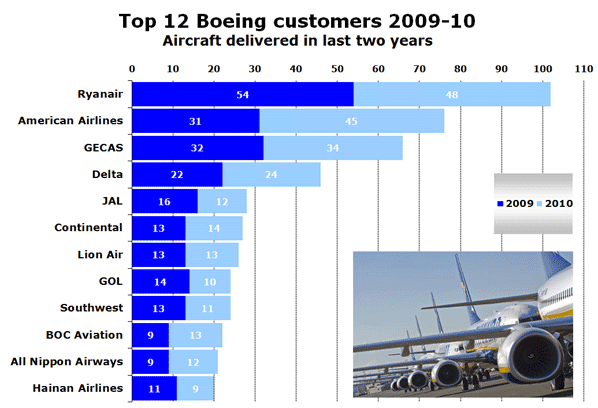 Among Boeing’s customers, Ryanair keeps a firm hold of the position as the leading recipient of aircraft deliveries, followed by American Airlines. However, because Boeing releases its delivery data without revealing which the receiving carrier is for aircraft delivered to leasing companies, its numbers should be taken with a pinch of salt. For example, the lack of any ‘MEB3’ Gulf carriers in the ranking is notable, but could be related to this fact.

For the first month of 2011, Airbus continued to maintain its higher delivery speed over Boeing, instantly taking the lead with 33 delivered aircraft against the American manufacturer’s 26. 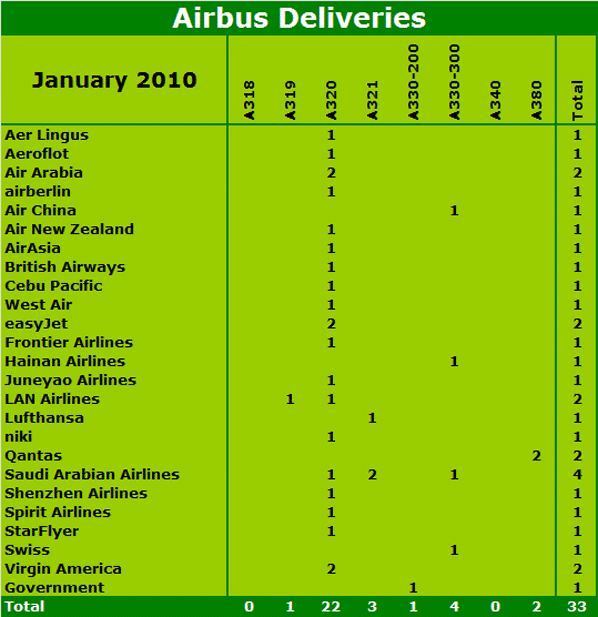 While Saudi Arabian Airlines’ fleet renewal programme continues to make the airline a major recipient of Airbus aircraft, taking four units – both single-aisle and widebody – in January, Qantas sticks out for receiving two A380s in the first month of the year.

Notable deliveries also include the delivery of an A320 to West Air of China, a subsidiary of Hainan Airlines. Although this is the first time the airline receives an Airbus aircraft from the manufacturer, it has had two brand new A319s in the last year through parent Hainan Airlines.

The Japanese premium low-cost carrier StarFlyer also boosted capacity as it took its fifth A320 in the last month. 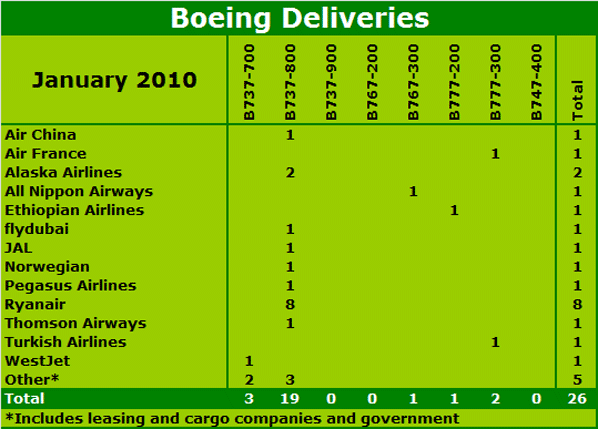 Although only 14 airlines took delivery of Boeing aircraft in January, Ryanair took an entire eight aircraft out of its 737-800 order backlog. Except for the Irish, pan-European low-cost carrier, only Alaska Airlines took more than one aircraft with its two 737-800s.