LOT, Ryanair and Wizz Air still vying for #1 on international routes from Poland; Warsaw to get second airport in 2012 Flights between Warsaw and Cairo resumed in October after a 12-year hiatus, with LOT launching a three times weekly service. A year-on-year comparison (for February) reveals that LOT has regained its position as the leading international airline in the Polish market based on seat capacity. (Images courtesy of Tomasz Zawadzki, PLL LOT)

Since anna.aero last analysed Poland’s air travel market, there has been a sense of consolidation. Poland’s six biggest airports (Warsaw, Krakow, Katowice, Gdansk, Wroclaw and Poznan), which account for around 95% of the country’s commercial air passenger traffic, saw passenger numbers fall by 8% in 2009, before bouncing back with 8% growth in 2010. As a result, Poland’s commercial airports handled more than 20 million passengers once more in 2010, compared with less than seven million in 2003, the year before Poland joined the EU. 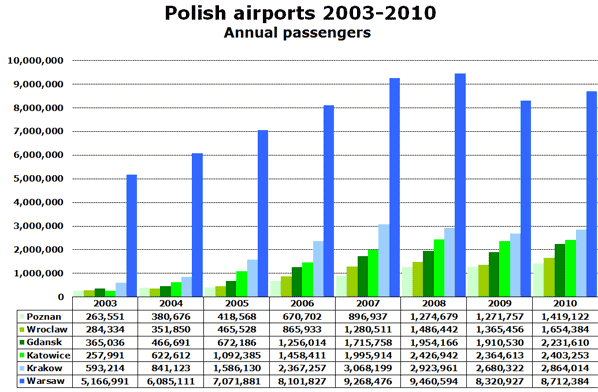 In 2000, Warsaw handled just over three-quarters of air passengers at Poland’s top six airports, but in 2010, this share had fallen to just 45%. While Warsaw airport has grown to handle almost nine million passengers, Poland’s regional airports have grown faster in percentage terms and now handle well over half of all Polish air traffic. The most impressive market share growth has come from Katowice, which handled under 3% in 2000 and now accounts for over 12%. 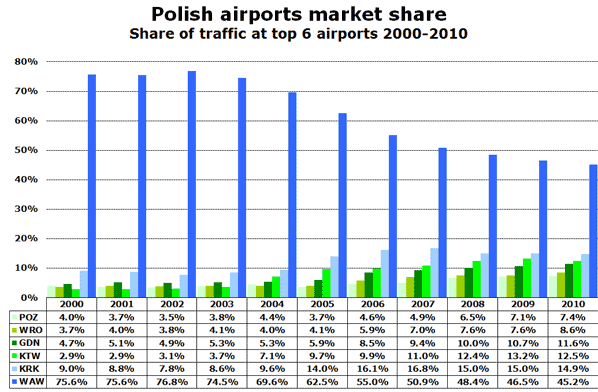 The fall in passenger traffic in 2009 hit Warsaw airport particularly hard. Not only did it lose most passengers (over one million) in absolute terms, but this also represented a fall of 12%, a higher figure than at any other Polish airport. Although Warsaw gained more passengers than any other Polish airport in 2010 (almost 400,000), its growth of just 4.7% was well below the national average of 7.7% and was well behind Wroclaw (+21.2%), Gdansk (+16.8%) and Poznan (+11.6%). 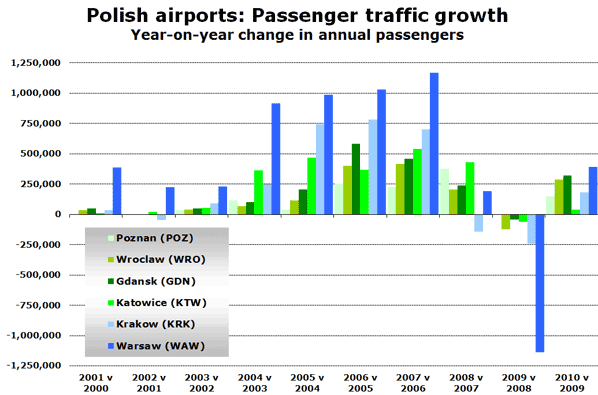 A year-on-year comparison (for February) reveals that LOT has regained its position as the leading international airline in the Polish market based on seat capacity. In February 2008, it was the leading carrier before being eclipsed by Ryanair in February 2009. In February 2010, it was Wizz Air’s turn to become number one, but based on OAG data, LOT has once more taken the lead this year. 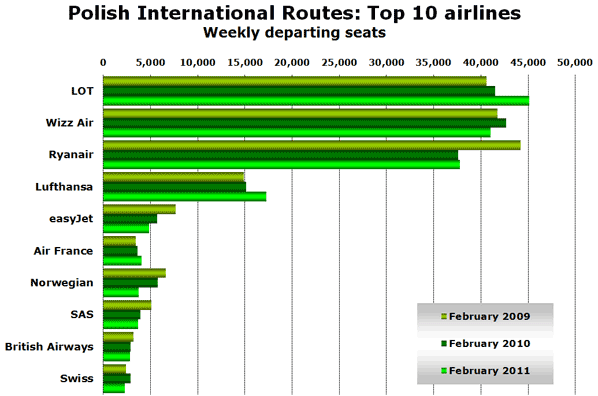 Two other LCCs, easyJet and Norwegian, have noticeably cut their winter operations to and from Poland, while germanwings, which linked Cologne/Bonn and Stuttgart with Krakow and Warsaw last winter, has axed all winter services to Poland, while for summer only, the Stuttgart to Krakow link has been re-instated.

The relative lack of low-cost services in Warsaw may finally be addressed by the development of Modlin Airport, 35 kilometres north-west of Warsaw. A former military airport, construction finally began last October on adapting the airport to commercial use. A new terminal is being constructed capable of handling up to two million annual passengers. The aim is to have the airport finished in time for Poland’s joint hosting (with Ukraine) of the 2012 European football championships.

Modlin Airport, 35km north-west of Warsaw, is being developed for commercial use. Work on a new terminal, with an annual capacity of two million passengers, began in October and is scheduled for completion in mid-2012. According to Michał Marzec, general director of Polish Airports State Enterprise, the new airport will supplement the offer of Warsaw Chopin Airport. “It won’t deprive Chopin Airport of passengers, but will broaden the market,” he said.

Possibly reflecting the problems in the UK and Irish economies, seat capacity to and from Poland (which boomed when many Poles were able to find jobs in these markets after joining the EU in 2004) has fallen in each of the last three years. However, the UK still remains the leading international market from Poland. 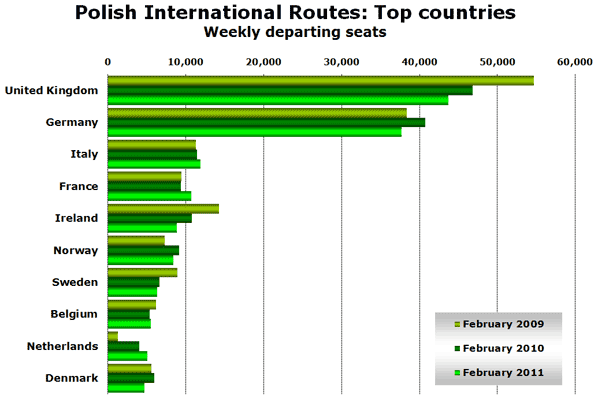 Since last February, the UK – Poland market has seen the following service changes. While the number of total services has fallen by just two from 55 to 53, this disguises the fact that eight airline routes were dropped while six were added.

In the last 12 months, the Dutch market has seen capacity growth of almost 27% thanks to Wizz Air adding Eindhoven routes from Warsaw and Wroclaw (in March 2010), while KLM has added a third daily frequency on its Amsterdam – Warsaw service.

LOT offers multiple daily flights from Warsaw to each of the other main Polish airports (except for Lodz). It currently has a monopoly on domestic flights from Warsaw. As Poland’s regional airports have seen a surge in international services (thanks predominantly to low-cost carriers), so capacity in the domestic market has been reduced as fewer people are using LOT’s Warsaw flights to connect to international markets. According to AEA data, LOT increased the number of passengers flown in 2010 (on all scheduled services) by 10%, passing the four million mark. Average load factor for the year was up two percentage points to 74.5%.