Not sleeping in Seattle; Alaska Airlines racks up profits as network expansion focuses on Hawaii and Mexico

Alaska Airlines inaugurated its daily Bellingham-Honolulu service in January. A Hawaiian priest blessed the aircraft on the tarmac, while frequent flier David North cut the lei before boarding. Routes to Hawaii and Mexico have dominated the profitable airline's expansion lately and more Hawaiian services are launching next month.

So which major US airline achieved the best operating margin in 2010? Southwest? JetBlue? No, the answer (according to Airline Weekly) was Alaska Airlines, which reported an operating margin last year of 12.6%, well ahead of its nearest rival Southwest with 9.6%. It also reported a stunning load factor for the year of 83.3%, up a significant four percentage points on 2009. Passenger numbers at Alaska Airlines grew by 6.1%, while at Horizon Air, demand was up just under 1%. Another recent announcement was that it would be migrating regional operations from its wholly-owned subsidiary Horizon Air (an airline it acquired in 1986) to the Alaska brand, although the airline will remain a separate entity within the Alaska Air Group. 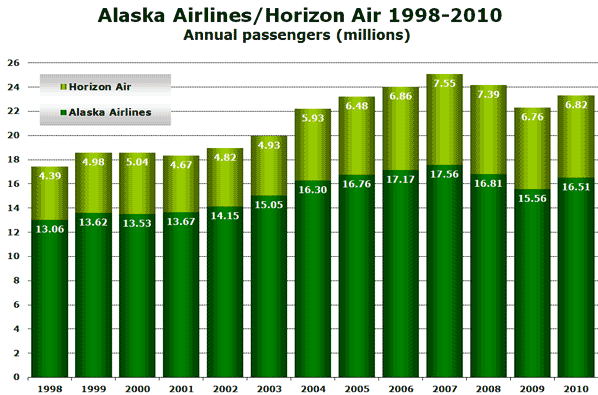 Alaska Airlines’ fleet currently comprises over 100 737s of various types and the carrier recently placed an order for 13 737-900ERs, as well as an additional two 737-800s. Being based in Seattle, buying Airbus is presumably not a viable option. Horizon Air’s fleet consists of 40 Bombardier Q400s (with eight more on order) and almost 20 CRJ700s, which the airline apparently plans to phase out.

Alaska Airlines is the official jersey partner of the Portland Timbers for the 2011 Major League Soccer season. The official uniforms, training wear and apparel line were unveiled to 1,000 fans at a fashion event – ‘Runway on the Runway’ – held in sister carrier Horizon Air’s hangar at Portland International Airport.

Like Europe’s airberlin, the airline’s name is becoming increasingly inappropriate as its route network diversifies. The airline’s origins may have been based on flying to and from Alaska, but the company headquarters and its biggest operational base is in Seattle, in the state of Washington. In fact, Anchorage (its largest base in Alaska) ranks just fourth among the airline’s busiest airports this winter, with only two other Alaskan airports (Fairbanks 10th and Juneau 13th) making it into the airline’s top 15 airports. 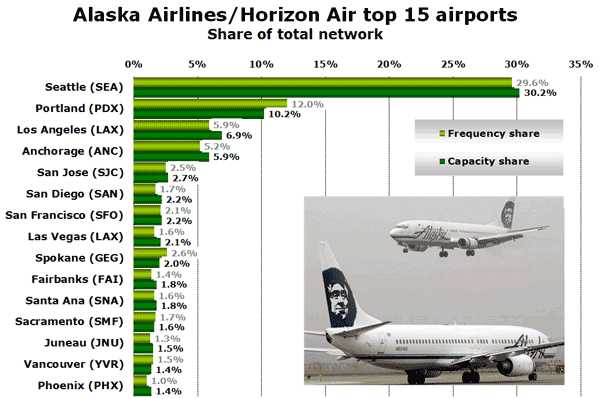 The Bellingham-Honolulu service was perceived as a pre-emptive strike against Allegiant Air’s plans to start serving Hawaii with a fleet of recently sourced 757s. Bellingham is a major base for Allegiant Air, while for Alaska Airlines and Horizon Air, it is only its third route from the airport after Seattle and Las Vegas.