Ryanair pulls five aircraft from Girona as government deal falls through; 18 routes to be axed, 17 reduced 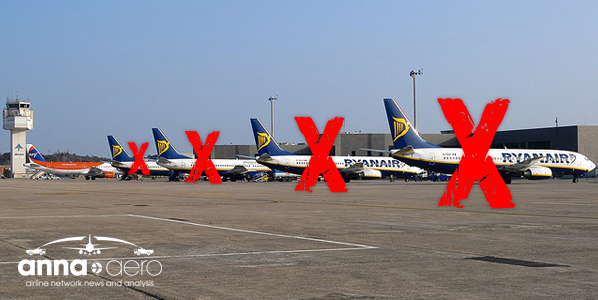 With a 95% share of traffic at Costa Brava’s Girona Airport, the impact of Ryanair’s reduction in Girona will be considerable. The airline has already reduced as it has moved operations to nearby Barcelona, which now has become an even larger Ryanair base.

Earlier today, Ryanair announced that it is pulling five aircraft from its base in Girona on the Costa Brava as the new regional government chooses not to honour the agreement signed between the airline and the previous government.

The impact on the airport’s operations will be considerable. Ryanair hugely dominates at the airport where it handled 4,615,161 passengers in 2010 out of an airport total of 4,858,644. That is a staggering 95% share held by the Irish low-cost carrier, while the second-largest carrier in 2010 was Transavia.com at under 2%.

Passenger numbers have already begun to drop at the airport as Ryanair has moved services over to its new base at Barcelona’s main airport El Prat, 90 kilometres further south, which launched in September. Girona’s traffic declined by 34.2% and 40.4% in November and December respectively, while the January 2011 figures are down 32.5%.

As recently as October, Girona was Ryanair’s largest airport in Spain. In the short time since, it has been reduced to being the airline’s third-biggest Spanish airport after both Madrid and the emerging Barcelona base.

Analysis of data from AENA shows that it has taken just three months for Ryanair’s load factor at Barcelona to be better than that at Girona and in January the difference was as high as six percentage points.

Ryanair has already announced which routes are to take the hit. Notably, the list features a mixture of routes varying from those currently operating at high frequency, such as the currently daily flights to London Gatwick, to those not even launched yet, such as Kristianstad in Sweden.