US airlines all report growth in January; international demand growth outstrips domestic at all four majors American Airlines’ fastest-growing region is Latin America. In November, the airline greatly expanded its Brazilian network and it now operates to six Brazilian airports from three points in the US. Meanwhile, Delta’s Pacific expansion, which earned the airline an anna.aero Asia-Pacific ANNIE, reveals itself in an RPM growth of almost 20%.

US airlines all report growth in January; international demand growth outstrips domestic at all four majors

The latest data from the leading US carriers shows that all of them reported traffic growth (measured by system RPMs – Revenue Passenger Miles) in January. For the second month in a row, the airlines have separated into two divisions regarding growth. Seven carriers (AirTran, American, Delta, Frontier, JetBlue, United and US Airways) have reported system RPM growth of between 0% and 6%, while four carriers (Alaska Airlines, Allegiant, Hawaiian and Southwest) have all reported growth of between 13% and 20%. 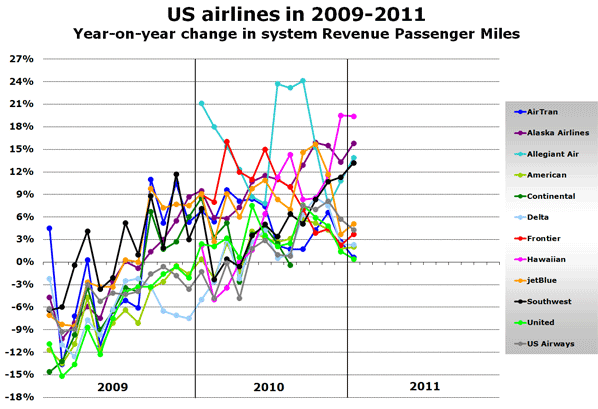 A close look at the four remaining ‘legacy’ carriers (American, Delta, United, US Airways) reveals that all of them have seen international demand grow faster than domestic demand. In fact, American (-0.7%), Delta (-1.7%) and United (-2.3%) all saw domestic demand fall in January. Fortunately, international demand grew by 6.2% for American, 8.3% for Delta, and 2.8% for United. For American, the star regional performer was Latin America (+12.9%), for Delta it was the Pacific (+19.6%), and for United it was also the Pacific (+8.4%).

Although load factors in January typically are among the lowest of the year, eight of the 11 airlines analysed reported a rise in average load factor in January compared with the same month in 2010. The exceptions were American (down 0.4 percentage points), United (down 0.6 points) and Delta (down 1.4 points). 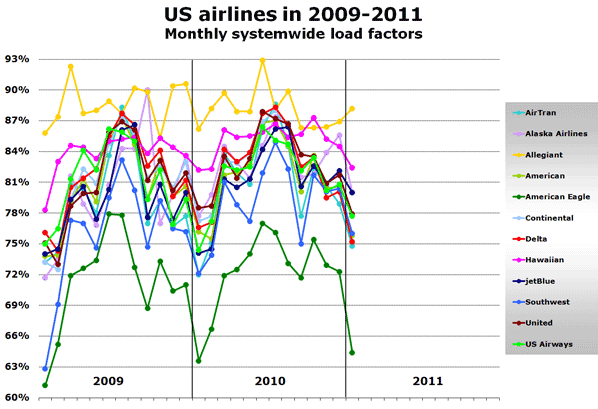