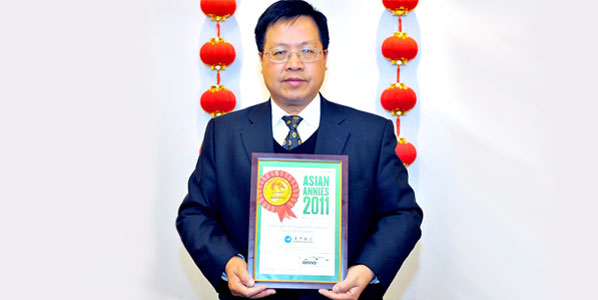 Xiamen Airlines’ General Manager Che Shanglun proudly displayed the framed certificate for the Asian ANNIE Prize that the airline was awarded for increasing its route network by 31 routes in the last year.

As the Chinese workforce has now returned after New Year’s festivities, the staff at Xiamen Airlines had another reason to celebrate. The airline based on the southeast coast of China was the winner of the Asian ANNIE category “Airline with the most new routes”, an honour that it shared with Lion Air of Indonesia. Between February last year and February this year, the airline launched 41 new routes, but dropped 10, resulting in a net increase of 31 new services; one of which was between Quanzhou in the southeast of Mainland China and the Special Administrative Region of Macau, which launched on 5 November.

Although the airline is majority-owned by China Southern, the airline that we confirm in this issue is the largest recipient of Airbus aircraft, Xiamen Airlines is an all-Boeing operator.

“The importance of the anna.aero Annie Prizes are their basis on science, statistics and evidence rather than merely the opinions of a panel of judges or votes. Using OAG schedule data for almost 1,000 airports and over 200 airlines operating in the Asia-Pacific region, our team of data experts have pored over the figures and come up with a transparent way of rewarding airlines and airports that have achieved notable route and traffic related success during the last year,” said anna.aero Editor Ralph Anker, himself a former route planner with the European low cost airline easyJet.