Hartsfield-Jackson Atlanta International Airport, which welcomed a new  Vision Airlines service from Louisville  in December, recorded year-on-year growth of 1.5% in 2010. Meanwhile,  2010 US ANNIE  winner Charlotte Douglas International Airport was the only US airport to record double-digit growth, in part caused by its new Rome service.

This week, anna.aero has collected 2010 traffic data for the top 20 airports in the USA, which reveals that between them passenger numbers grew by 2.9% in 2010. Of the top 20 airports, only two (Newark and Las Vegas) failed to record year-on-year growth, while Charlotte was the only airport to record double-digit growth. In terms of ranking, Houston Bush has now overtaken Las Vegas for seventh place, while San Francisco has overtaken Phoenix for ninth place. The airport rankings between 11th and 20th have remained unchanged. 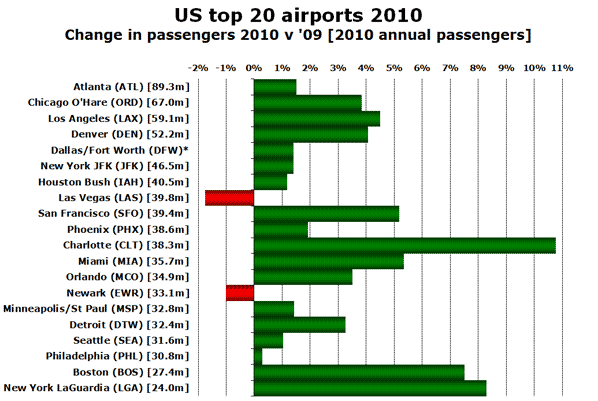 Source: US airport websites *Data only available up to November 2010

Among airports ranked between 21st and 30th, growth was on average 2.6%, with Fort Lauderdale (+6.4%) reporting the highest growth, and two airports (San Diego and Tampa) reporting modest declines in traffic.