Ryanair’s new bases in Gran Canaria and Tenerife Sur that already opened last week will result in 31 new routes. One airport where this caused excitement was Knock Airport in Ireland, where even the former Miss Ireland joined in the celebrations. In April, the airline will also open a base in Lanzarote, further increasing its market share where it already last year was one of the top three airlines.

When anna.aero last looked at the Canary Islands, traffic to and from the region was still dominated by local regional carriers, Spanish airlines and charter carriers. Located over 1,100 kilometres south of mainland Spain and between 100 and 500 kilometres west of the Central Moroccan coastline, the Canary Islands have long been a popular destination for Nothern European leisure travellers, especially those from the UK and Germany. Passenger numbers at the five main airports serving the seven main islands declined by almost 12% in 2009 before recovering slightly in 2010 by 4.4%, above the average of 2.7% achieved across all of Spain’s 40+ airports.

Helping this recent growth has been Ryanair’s expansion in the market and this week saw the airline start basing aircraft at Gran Canaria (resulting in nine new routes this week) and Tenerife Sur (resulting in 11 new routes starting this week). 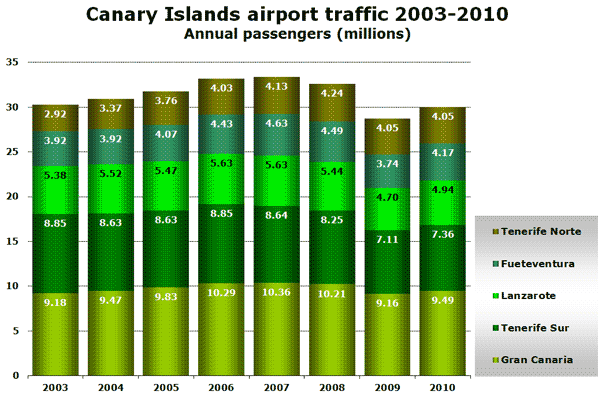 Between 2003 and 2010, traffic across all five main airports has fallen by just under 1%, but during that period Tenerife Norte has grown by 39%, Fuerteventura by 6.5% and Gran Canaria by 3.3%. Traffic at Lanzarote has fallen by 8%, while Tenerife Sur is down 17%.

Analysis of AENA data for 2010 shows how quickly Ryanair has established itself as a major player at four of the five airports. It is already established as a top 3 airline at Tenerife Sur (first), Lanzarote (second) and Gran Canaria (third), while it ranks sixth at Fuerteventura behind Thomas Cook (fourth) and Condor (fifth).

Tenerife’s two airports serve different markets. Tenerife Norte acts as an inter-island hub dominated by Spanish carriers and domestic routes. Tenerife Sur, which opened in 1978, is used mostly to serve international leisure passengers visiting the island. Less than 20% of the airport’s passengers are on domestic flights.

Apart from Ryanair’s expansion (involving some 51 new routes in the Canary Islands), other carriers are also expanding their operations at these airports, with easyJet today (23 February) announcing a new Edinburgh to Tenerife service starting in mid-September. All the new services for the winter 2010 and summer 2011 seasons are summarised in the following table.