Virgin America’s January launch of flights from both Los Angeles and San Francisco are among the new routes with the highest frequencies to the Mexican coastal destination Cancun. The five and three weekly flights, which were launched by the rock band the Goo Goo Dolls and VH1’s TV presenter Jim Shearer, were in the last week complemented by five new routes from the US on Continental and Delta, each operating weekly. 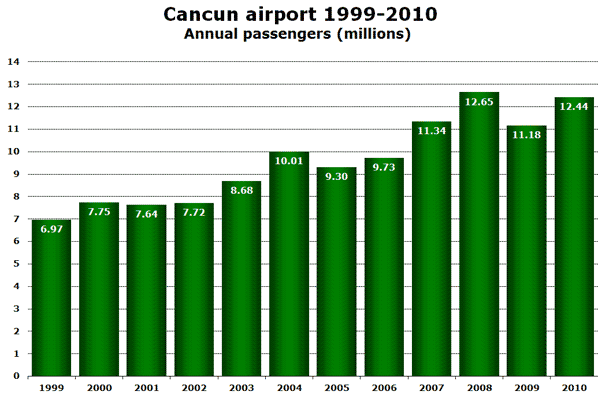 The airport’s seasonality profile is unusual with international demand at its highest during the winter months (and peaking in March), while domestic passenger demand peaks in July. The dip in traffic (especially international) starting in May 2009 was a result of the swine flu epidemic that broke out in the country at the end of April of that year. 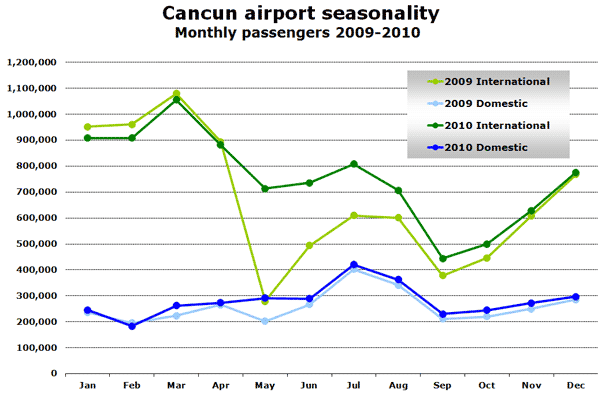 American Airlines is leading US carrier; Delta serves most airports

Not surprisingly, the USA is the leading country market accounting for around 70% of international traffic with the leading US destinations in 2010 being Houston, New York, Dallas/Fort Worth and Atlanta, with all of these markets generating at least half a million annual passengers. As a result, US airlines dominate the rankings of the leading airlines operating international services at the airport. 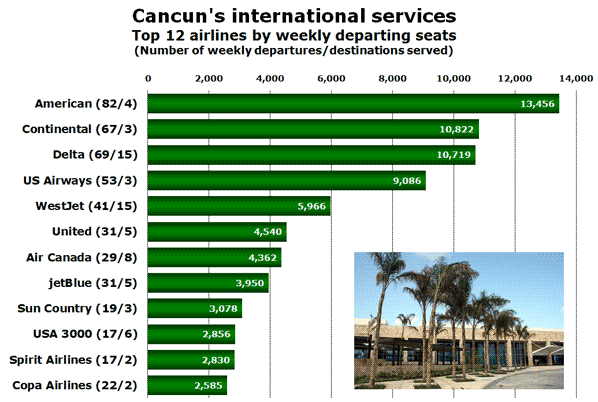 Delta and WestJet serve the most destinations non-stop (15 each), although Delta has this week added two further destinations; Columbus and Tampa, and will in the coming two weeks move into a clear lead with 19 destinations as it adds routes from the two Texan airports Austin and San Antonio.

Since the start of the winter season, the airport has welcomed two new airlines. Back in November, Russia’s Transaero began weekly flights from Moscow Domodedovo airport, while in mid-January, Virgin America arrived with flights from both Los Angeles (five times per week) and San Francisco (three times per week).

Apart from Russia, there are European scheduled services this winter to Belgium, France, Germany, Italy, the Netherlands, Spain, Switzerland and the UK (with British Airways, Thomas Cook Airlines and Thomson Airways). Regional services include Copa Airlines to Panama, LACSA to El Salvador, LAN Peru to Peru, and daily flights with Cubana to Havana.