Hellenic Imperial Airways transported the Greek national football team to South Africa, as the airline launched its flights in time for the FIFA World Cup that boosted international traffic to South Africa. Meanwhile, Sir Richard Branson’s V Australia’s route between Melbourne and Johannesburg only lasted a year. Later this week, the airline will fly the route for the last time.

Airport traffic in South Africa is dominated by OR Tambo International Airport in Johannesburg, which handles over half of all the country’s air passengers, and the vast majority of the country’s international air traffic. Last year, the airport saw passenger numbers grow once more by 5%, having fallen in both 2008 and 2009. However, total figures for the year were still well below the peak achieved in 2007, although the hosting of the FIFA World Cup in South Africa last summer helped international traffic to a new all-time high. 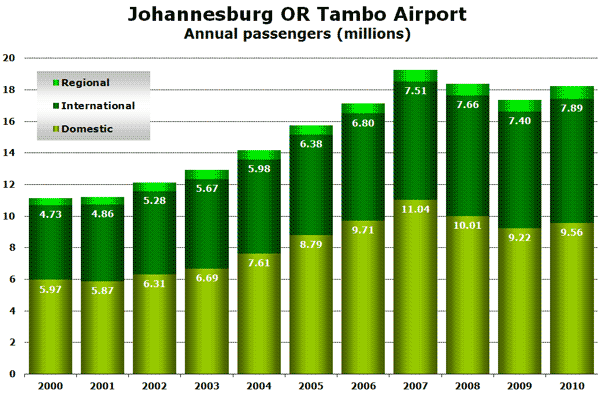 Domestic traffic at the airport, which almost doubled between 2001 and 2007 (thanks to the emergence of low-cost carriers such as Kulula and 1time), has since declined by 13%.

Unlike many global sporting events which have apparently had very little impact on overall air travel demand in the host nation or city, the effect of hosting last summer’s FIFA World Cup in June and July can clearly be seen by comparing monthly figures on a year-on-year basis. 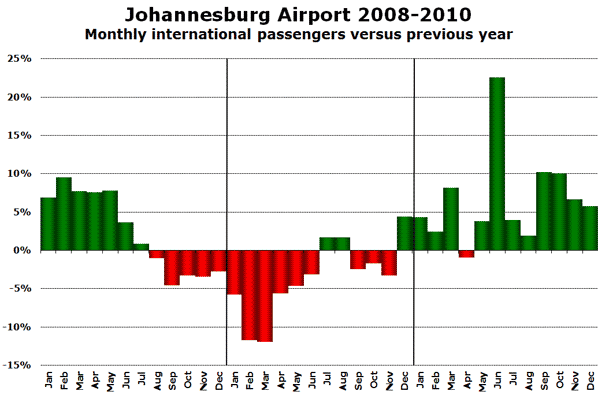 Whereas in May and July international traffic was up less than 5% compared with 2009, in June it was up 22.6%. Although the tournament ran from 10 June until 11 July, by the beginning of July, only eight of the original 32 teams were still left in the competition.

According to OAG schedule data for February and the 1time website, all of these routes are still operating. However, the V Australia service from Melbourne will operate for the last time tomorrow, on 24 February.