As Icelandair starts four new routes this summer – expanding its networks in both northern Europe and North America – the airline earlier this month promoted itself at the Reykjavik Mid-Atlantic Travel Seminar with 500 trade partners from both continents.

Iceland’s national airline, Icelandair, has announced plans to start four new routes this summer. By the airline’s previous standards this could be considered major expansion as it has previously launched less than 10 routes in the previous four years. Having endured a local banking collapse in 2008, and then one of the country’s volcanoes erupting last April, the airline is planning to grow further in 2011 after seeing passenger numbers surge 14% last year. Passenger numbers peaked in 2007, but this year could see the airline set a new record. 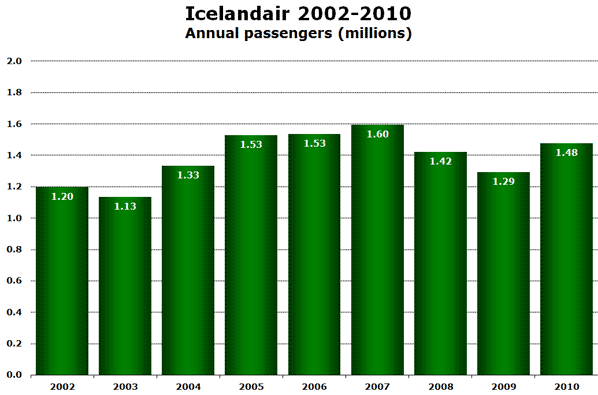 Seasonality plays a major role in the airline’s operations, with passenger numbers in July and August over three times higher than in February. 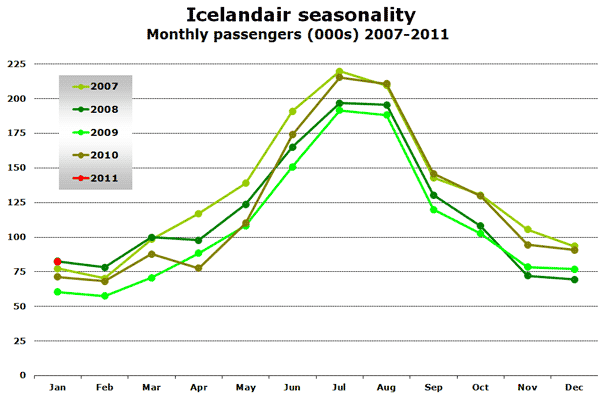 This year’s already announced four new Icelandair routes follow two launches last year. Brussels and Trondheim both got connected with the country on the border between the European and North American continents with its national carrier in June 2010.

After having launched just two new destinations in 2010 (Brussels and Trondheim services both began in June), Icelandair is launching four new destinations this year; one in North America and three in Europe. In mid-May, the airline is launching flights to Washington Dulles. The airline has previously served the Washington area through Baltimore/Washington Airport, however, these services were suspended in 2007, having been launched back in 1983. During June this year, Icelandair will launch routes to Billund (Denmark), Hamburg (Germany) and Gothenburg (Sweden). The airline’s network can be summarised in the following table, which shows the destinations served this summer and the weekly frequency (WF).

While Icelandair is not a major player in the transatlantic market as a whole, in 2009, around one-third of its traffic was connecting between the US and Europe via Iceland. Around 30% of traffic was originating in Iceland, while 37% of demand was originating outside of Iceland and travelling to Iceland.

Aging fleet with no replacements yet ordered

Icelandair operates some 16 757-200s of which five are used purely for cargo operations. The average age of the fleet is over 16 years and so far, the airline has not placed any orders for new aircraft to replace them.