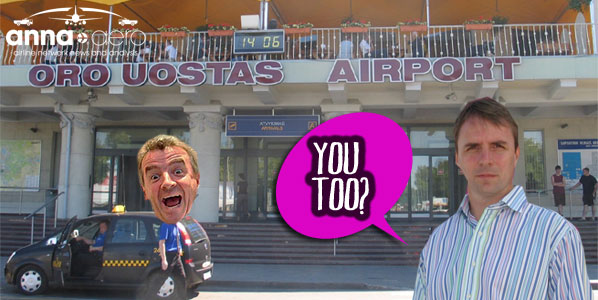 While Wizz Air’s József Váradi expected to have Ryanair next door in Kaunas, Michael O’Leary’s airline is now moving into Vilnius as well. As a result, the two airlines will compete for passengers to Milan, Rome, Barcelona and London.

Earlier this week, Ryanair announced that it would start flying to its second airport in Lithuania, following on from the success of its base at Kaunas. According to anna.aero’s research, Kaunas airport was the fastest-growing in Europe last year, with passenger numbers up 77% to almost 810,000. The country’s capital airport at Vilnius (where traffic grew by just 5% to 1.37 million in 2010) will from the beginning of May welcome Ryanair flights from five airports; Dublin, Girona, London Stansted, Milan Bergamo and Rome Ciampino.

In mid-April, Central Europe’s biggest LCC Wizz Air (which carried 9.6 million passengers in 2010) will be starting a small base at Vilnius, serving eight destinations including airports in Barcelona, London, Milan and Rome. Without a national airline since the demise of flyLAL in January 2009, other carries from neighbouring countries (such as Estonian Air and airBaltic) have gradually been developing a network from the capital airport.

The table below summarises by country which airlines will be operating which routes this summer.

Ryanair’s Girona and Milan Bergamo routes are being transferred to Vilnius from Kaunas. However, the Kaunas base will continue to see new routes offered with Alicante, Kos, Rhodes, and Stockholm Skavsta all being added for 2011. However, routes operated since last May from Kaunas to Berlin (Schönefeld) and Düsseldorf (Weeze) will cease at the end of March as part of the airline’s reduction in its flying programme to and from German airports as a response to the introduction of the government’s so-called ‘eco-tax’ at the beginning of this year.