We’re not too big on jargon at anna.aero, but we did invent the industry term ‘MEB3’ to define the ‘Middle East Big 3’ of Emirates, Etihad and Qatar Airways. With their home hub airports located in very close proximity to each other, the general perception among their managements, passengers, and for that matter the many airports that would like their services, is that all three are trying to offer the same basic proposition: global connections via a convenient hub. Most industry observers are aware that in terms of size, there is a clear pecking order; Emirates is the biggest, followed by Qatar Airways and then Etihad (which only began operations as recently as November 2003).

An analysis of the passenger aircraft fleets for all three carriers reveals several interesting points:

The table below summarises the fleets of all three airlines, listing the number of aircraft of each type and the upper and lower limit of the number of seats in each aircraft type.

As is well documented, all three carriers have extensive orders placed with both Airbus and Boeing. Here as well, Emirates has the most aircraft on order (still only widebody aircraft), followed by Qatar Airways and Etihad. All three carriers have major orders for the still unbuilt Airbus A350 series of aircraft, and across all three airlines, around two-thirds of the 430 or so ordered aircraft will be delivered by Airbus. 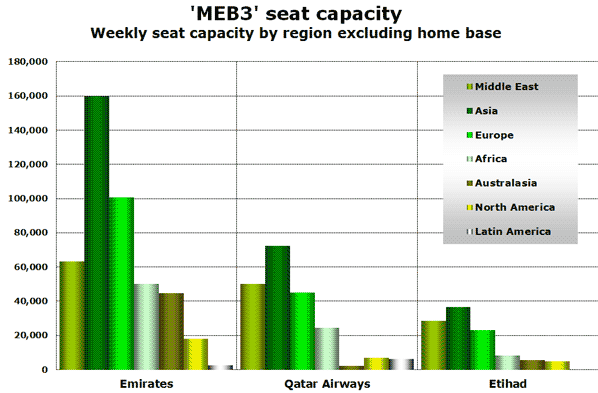 In terms of new routes announced for the rest of the year, Qatar Airways leads the way with five; Stuttgart (6 March), Aleppo (6 April), Shiraz (5 June), Venice (15 June) and Montreal (some time in June). Aleppo in Syria will notably become the carrier’s 100th destination. Already since the beginning of the year, Qatar Airways has launched new services to Bucharest, Budapest and Brussels.

Emirates has currently revealed plans for just two more new routes this year. Both are in Europe, with Geneva starting on 1 June and Copenhagen on 1 August. At present, Etihad has not revealed any further new routes for 2011, with Bangalore/Bengaluru its last route launch on 1 January.