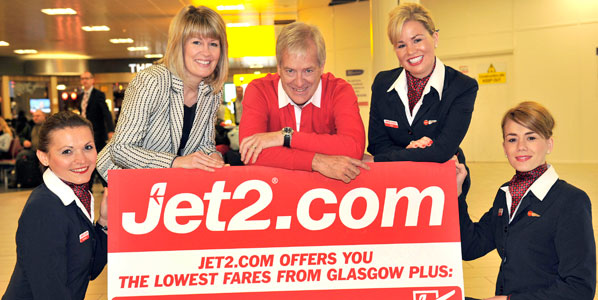 At the beginning of the summer season, Glasgow will become Jet2.com’s eighth base, here celebrated by the airport’s managing director Amanda McMillan and Ian Doubtfire, managing director of Jet2.com. The size of the operations will, however, not bring it to the airline’s top 12 airports this summer.

Earlier this month, Jet2.com celebrated its seventh birthday, having launched from Leeds/Bradford Airport in the UK on 12 February 2003 with a flight to Amsterdam. Initially, the airline owned by the Dart Group expanded rapidly and by 2007, it was transporting almost four million passengers annually. However, in 2008 and 2009, the airline reigned in its ambitions and passenger numbers fell to just under three million in 2009. However, last year, while the UK market as a whole declined, Jet2.com once again grew, by almost 10%. At the same time, it achieved an impressive 87% load factor across the whole of the year, up over five percentage points on its performance in 2009. 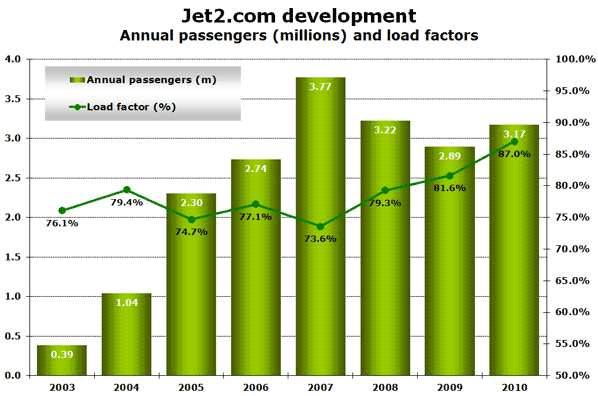 The airline’s operations are becoming increasingly seasonal. In January and February of last year, Jet2.com carried less than 100,000 passengers per month, but in both July and August, it handled over half a million, a new record for the carrier. 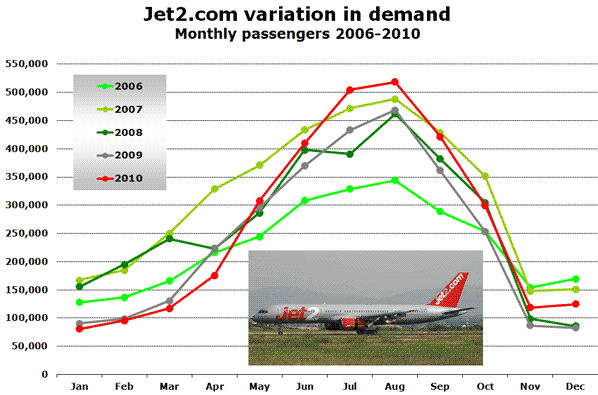 Base development in response to competitors

Jet2.com operates eight bases across the UK at Belfast International, Blackpool, East Midlands, Edinburgh, Glasgow, Leeds/Bradford, Manchester and Newcastle. Comparing schedule data for summer 2009 and summer 2011 reveals how the airline has shifted capacity around its bases. Its biggest base at Leeds/Bradford has seen the number of weekly departures fall since 2009, possibly as a result of the growing presence of Ryanair. However, at Manchester, where Ryanair pulled most of its routes at the end of the summer 2009 season, Jet2.com has expanded considerably in the last couple of years. easyJet’s decision to withdraw from the East Midlands market at the beginning of 2010 encouraged Jet2.com to set up a small base there last summer, while this year Glasgow becomes the airline’s eighth base. However, both of these airports just fail to make the airline’s top 12 airports ranked on weekly departures this summer. Jet2.com’s operations at Newcastle are being expanded as easyJet has reduced the number of based aircraft at the airport from five to three. 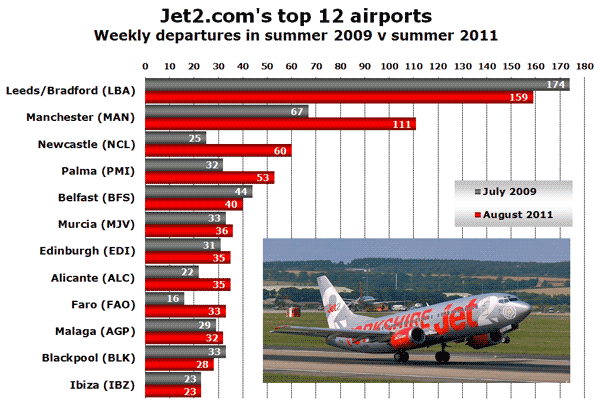 Since 2009, Palma de Mallorca has overtaken Murcia as the airline’s most popular destination. The other non-UK airports in the ranking are all summer-sun leisure destinations; Alicante, Faro, Ibiza and Malaga.

Over 20 new routes this year from six bases

So far, the airline has announced over 20 new routes that will start for the first time in 2011, bringing the network total to over 130. The new routes are summarised in the following table.

Some planned new services to destinations in Egypt and Tunisia have been put on hold as a result of the current situation in those countries.

The airline’s fleet currently consists of 24 737-300s, 10 757-200s and a solitary 737-800 that joined the company in January. The average age of the fleet is in excess of 20 years, but utilisation is relatively low, especially in the winter months. For this summer, the airline is leasing two 757s from Allegiant Air, which had acquired them for its planned Hawaiian routes. However, these it seems have been put on hold until 2012, enabling Jet2.com to use them instead this summer. In many ways, Jet2.com is a UK version of Allegiant Air, operating older aircraft on a very seasonal basis, from regional airports to primarily summer/winter, leisure/sun destinations and with its own holiday company to support the activities.