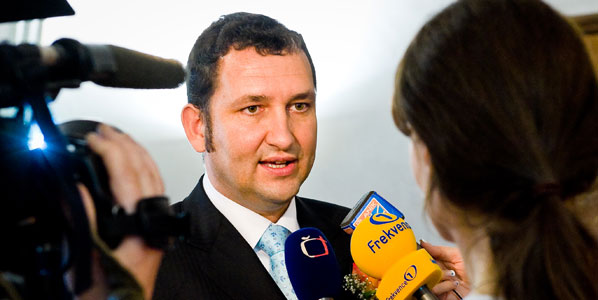 At a recent press conference, Czech Airlines’ CEO Miroslav Dvorak announced an expansion of Czech Airlines‘ holiday subsidiary. This coming summer, the airline appears to be expanding its network feeding fellow SkyTeam airlines. However, the airline’s communications department tells anna.aero that further announcements, possibly of new routes, are to be expected soon.

The struggling Czech national carrier CSA Czech Airlines is currently under scrutiny by the European Commission because the airline’s restructuring programme may violate European rules on state support. The latest suggestion is for the airline to be a subsidiary of the same state holding company as Prague Airport, Czech Airlines’ hub airport where it currently has a 43% share of total seat capacity. 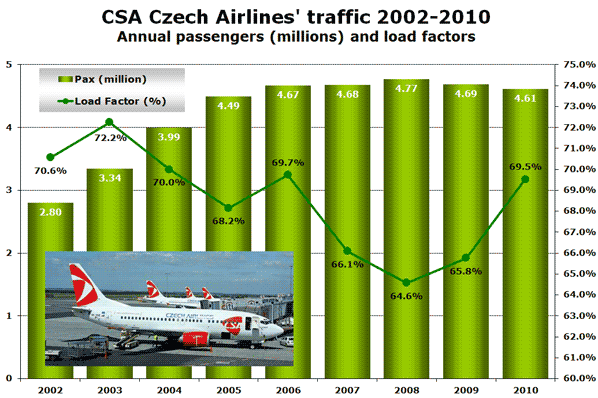 Although Czech Airlines’ traffic grew at double-digit rates at the beginning of the last decade, passenger numbers have been relatively stagnant in the most recent five years. The last two years have even seen minor declines of almost 2% annually. However, as a result of capacity reduction, the airline has increased its load factors. ASKs in 2010 were down over 18% on 2008, however, the load factor of 69.5% still puts the airline at the bottom half of AEA members that average 77.9%.

By 2009, Czech Airlines had dropped its entire long-haul network, with Toronto and New York being the last destinations to be pulled as the airline phased out its A310s, the only widebody aircraft in the fleet.

Last summer, Czech Airlines announced a further major overhaul of its network. The UK, which as recently as 2009 was Czech Airlines’ seventh-largest country market with services to both London Heathrow and Manchester, was dropped at the beginning of this winter season. Notably, the Manchester route only started a year ago and therefore only lasted one season. The airline also dropped two further country markets last year; Ireland and Turkey. 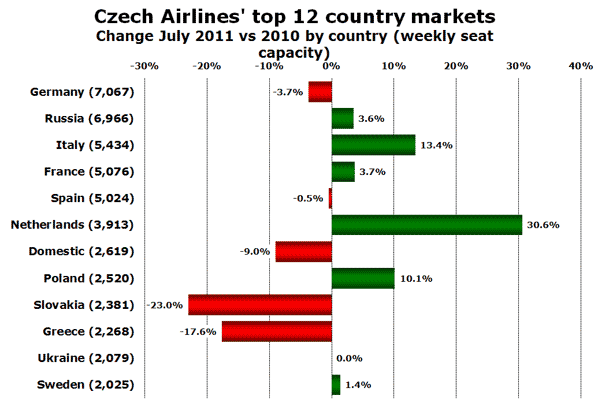 Comparing the airline’s currently available schedule for the high season this coming July with that of July last year reveals a number of changes. The airline’s communications department has, however, let us know that the summer schedule is not yet finalised and that further new routes may for example be announced in the near future.

The largest network reduction, percentage-wise, is to neighbouring Slovakia. While Czech Airlines’ services to the regional destinations Kosice and Zilina are almost unaffected, capacity to Bratislava has been more than halved between last summer and this coming July. Conversely, the reduction in Greece affects only regional destinations, Heraklion has been dropped and Thessaloniki reduced by 26%, while the core Athens services only have seen a marginal reduction.

Capacity to the Netherlands, which Czech Airlines only serves through Amsterdam Schiphol, increases with the use of larger aircraft. Two of the airline’s three daily flights to Amsterdam are this summer operated with the airline’s largest aircraft – 206-seat A321s. In spite of a capacity reduction to Bologna, Czech Airlines grows in the Italian market – the airline’s third-largest – through boosting Rome Fiumicino and Milan Malpensa services with 29% and 12% respectively. Polish growth comes from a Warsaw capacity increase of 14% as well as the launch of flights to the airline’s third Polish destination after Warsaw and Krakow – Poznan – which launched in January.

Notably, several of the markets where Czech Airlines is growing – Russia, Italy, France and the Netherlands – are homes to fellow SkyTeam airlines.

Next European airline to Vietnam? – with narrowbody fleet

Although not officially announced or available to book yet, GDS information suggests that Czech Airlines will return to the Far East market in June this year with flights to the Vietnamese capital Hanoi, where the airline would connect with SkyTeam partner Vietnam Airlines. However, as Czech Airlines lacks aircraft with the appropriate range in its fleet, flights are supposedly going to operate with A320s, stopping en route in Almaty in Kazakhstan. Notably, there is a considerable Vietnamese community in the Prague catchment area, which also is the target of LOT Polish Airlines’ new Hanoi service from Warsaw.