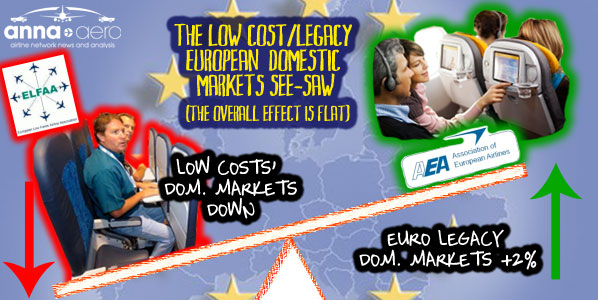 The 30 (mainly legacy) Association of European Airlines carriers reported 'domestic' traffic growth of 2.0% in 2010. However, anna.aero estimates that national/domestic traffic in 2010 was basically unchanged, implying that non-AEA carriers like Ryanair, easyJet, Flybe, Norwegian etc, must have seen their domestic passenger numbers decline in 2010.

Our recent analysis of the non-merger between Aegean Airlines and Olympic Air revealed how competition varied in the 11 biggest domestic markets in Europe. This week we examine data that shows how much (or not) domestic air traffic grew in 2010. The biggest domestic air travel markets in Europe are Spain, Italy, Germany, the UK and France. Of the nine country markets for which data is available five of them reported traffic growth while four of them saw passenger numbers decline. In all nine cases overall traffic growth was higher than domestic traffic growth with the difference ranging between 1.1 percentage points (for Italy) and 7.7 percentage points (for Finland).

For most countries data was available across all airports but for France and Greece data from Aeroports de Paris and Athens Airport was used. As these are the central hubs for the domestic route networks these are a good proxy for domestic traffic for the country as a whole.

For Europe’s 11th biggest domestic market in Denmark, data from Copenhagen airport shows that domestic traffic there was up almost 22% compared with overall airport growth of just over 9%. In the first quarter of 2010 Norwegian began three new domestic services from the airport to Billund, Bornholm and Karup. These complement the carrier’s existing domestic service to Aalborg which was launched in November 2008.

Recently published data from the AEA (Association of European Airlines) shows that their 30 members combined reported domestic traffic growth in 2010 of 2.0%, despite a 1% reduction in ASKs. RPKs were up 1.8% and the average load factor was up 1.8 percentage points to 67.7%. anna.aero estimates that overall domestic traffic in 2010 was basically unchanged compared with 2009 implying that non-AEA carriers (for example LCCs such as Ryanair, easyJet, Flybe, Norwegian etc) must have seen their domestic passenger numbers decline in 2010.