Shortest and longest: flydubai’s route between Dubai and Muscat in Oman, which launched in March last year, is only 350 kilometres, while the route to Ekaterinburg in Russia that launched last October measures just over ten times as long. The airline’s CEO Ghaith Al Ghaith took the time to attend both launch events.

Since the Dubai government’s low-cost airline flydubai launched operations in June 2009, the airline has grown its base at Dubai International Airport rapidly. Now, just over a year and a half later, the airline operates 33 routes with 15 factory-new 189-seat 737-800s, raking second in Dubai with a 7.5% share of the airport’s total seat capacity. In spite of operating smaller aircraft than Emirates, which operates wide-body aircraft only, flydubai has grown its seat capacity more than its full-service sibling compared with a year ago. 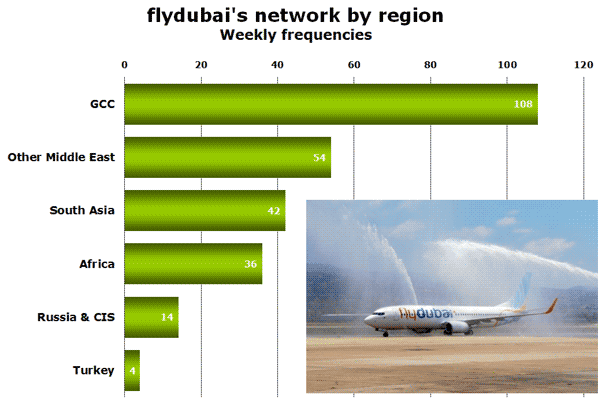 flydubai has almost 43% of its frequencies and capacity allocated to flights within the GCC states (Bahrain, Kuwait, Oman, Qatar, Saudi Arabia and the UAE), all of which the airline now serves. Of these routes, Doha in Qatar dominates with five daily services.

The last route to launch was to Port Sudan on the Red Sea coast, which was featured in this week’s report on new route launches.

At the other end of the spectrum, flydubai also operates some atypically long routes for a low-cost carrier. Eight routes – to Alexandria, Colombo, Ekaterinburg, Istanbul Sabiha Gökçen, Kathmandu, Khartoum, Lucknow and Samara – have block times in excess of four hours. The two routes to the Russian airports are even more than 3,000 kilometres long.

Constant expansion, but Air Arabia competes on 80% of capacity

flydubai has notably never (yet) dropped a route. Instead, the airline’s network expansion has been constant. The month when the airline expanded the fastest was in June 2010, after a year of operations, when five new routes were added in one single month.

Thirteen of the airline’s routes are additions to Dubai International Airport’s network, whereas the other 20 of its routes are operated in competition with other airlines. The majority of the new destinations added by the airline are regional destinations; three Saudi Arabian, three Egyptian, two Iraqi and two Syrian airports. flydubai also adds two longer routes; Kathmandu in Nepal and Ashgabat in Turkmenistan.

In the meantime, the airline’s low-cost competitor Air Arabia, based in nearby Sharjah, has focused its expansion on its joint ventures in Morocco and Egypt. Since flydubai launched, Air Arabia has launched six routes from its Sharjah base and dropped four, leaving it with 43 routes from its main base, 10 more than flydubai.

The two neighbouring low-cost airlines indirectly compete on 18 routes, which is more than half of flydubai’s route network, but translates to as much as 79% of the airline’s capacity.

The plan is for flydubai to continue expanding considerably. The airline has orders for 39 further 737-800 aircraft. Although it currently has no new routes announced, in the past, the airline has made its new routes public at relatively short notice.