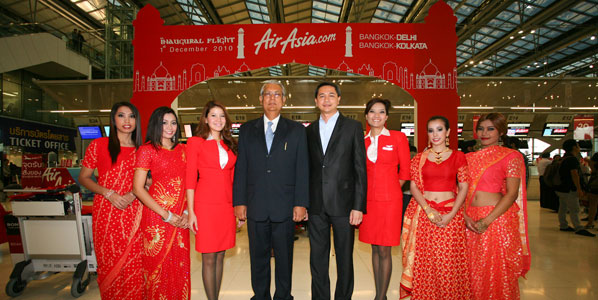 Kolkata was the fastest-growing of India’s major airports in 2010. Along with Delhi, which also grew in double digits, the two Indian airports got new, daily low-cost services with Thai AirAsia from Bangkok in December.

After declining in 2008 and growing modestly in 2009, India’s domestic air travel market boomed once again in 2010 with growth of almost 19%, generating some 52 million passenger movements. December was the busiest month in Indian aviation history with over five million passengers travelling within India for the first time. 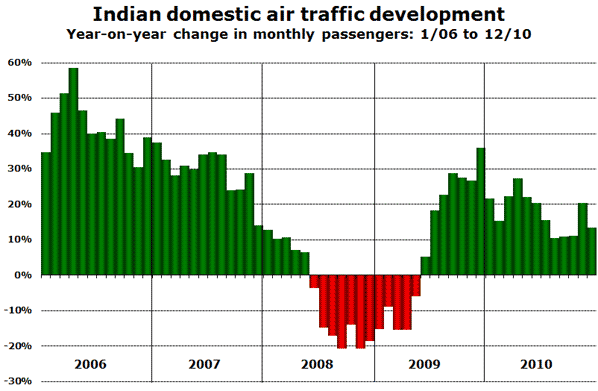 The battle for supremacy among India’s biggest airlines continues to be intense. For 2010 as a whole, Jet Airways and JetLite combined grabbed a 26% share of the passenger market, followed by Kingfisher (20.6%), Indian Airlines / NACIL (17.6%), IndiGo (16.3%) and SpiceJet (12.9%). GoAir with just under 6% was the only other significant carrier in the market. 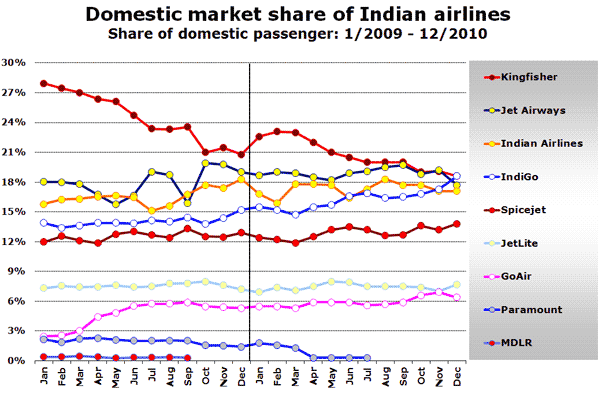 However, since the beginning of the year Kingfisher’s share has declined from 23% to just under 19% while at the same time IndiGo has consistently grown its share from 15% to just over 18%. As a result, if we treat JetLite as a separate company, by the end of the year there were four carriers with between 17% and 19% of the market, a very competitive state of affairs.

International traffic up over 10% this year

International traffic growth at Indian airports was above 10% for eight of the 12 months in 2010, peaking in May at 16%. For the year as a whole, the growth rate was around 11.5%, with December reporting the lowest growth of just 6%. 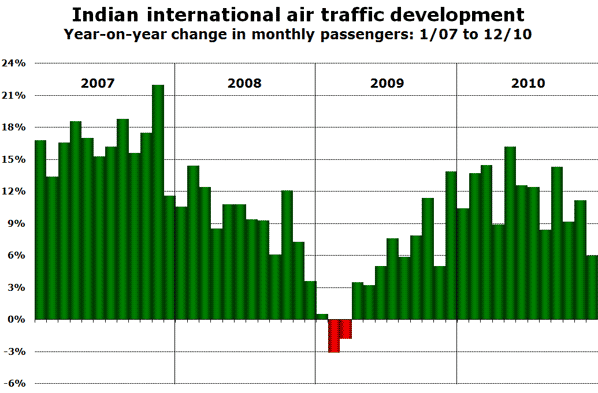 Last time we examined the Indian market, we looked at the Middle East market in more detail. This time, we turn our attention to the Western European market. This winter, a total of 13 destinations in Western Europe are connected to India with non-stop services, with London Heathrow having by far the most capacity, although Frankfurt offers more destinations. 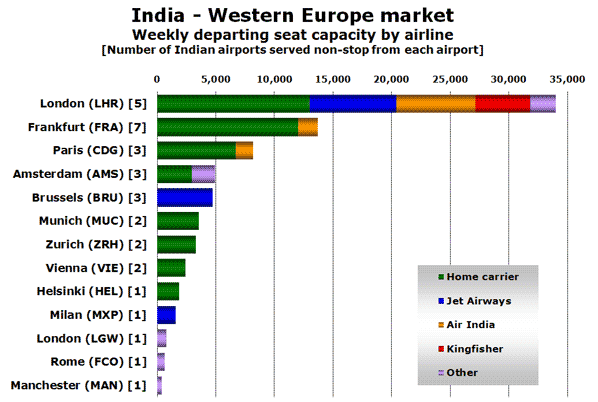 Kolkata is fastest-growing airport in 2010

The ICC Cricket World Cup (which started last week and finishes at the beginning of April) features national teams from 14 countries and will hopefully have some positive impact on passenger demand as fans follow their teams around India, Sri Lanka and Bangladesh.