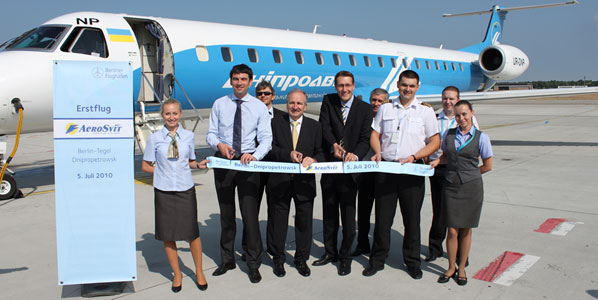 AeroSvit increased its passenger numbers the most in 2010 out of AEA’s members. A route contributing to the 35% growth is the airline’s daily service between Dnepropetrovsk and Berlin Tegel, which launched in July last year.

The 30-plus members of the Association of European Airlines (AEA) have reported passenger growth of 2.7% for 2010, a big improvement on the 5% fall suffered in 2009. Although passenger numbers were up, capacity (measured in ASKs) was unchanged from 2009, with traffic (measured in RPKs) up 2.6%, and average load factors up two percentage points to 77.9%. Between them the airlines carried some 343 million passengers in 2010. 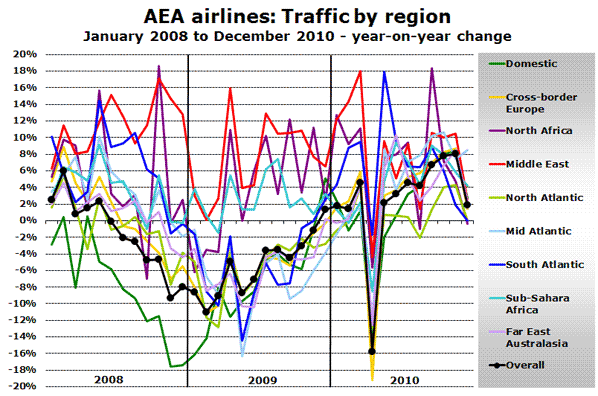 When analysed by traffic region, the worst performing geographic market is the North Atlantic. Total passenger numbers in 2010 were down 0.2%. The fastest-growing region was the Middle East (+8.2%), followed by South Atlantic (+6.3%) and North Africa (+5.6%). Domestic traffic was up 2.0%, while cross-border European traffic fared slightly better, with growth of 3.0%.

During 2010 as many as nine AEA members reported double-digit passenger growth with two Ukrainian carriers (AeroSvit and Ukraine International) ranked in the top three, split by Tarom of Romania. The performance of Turkish Airlines is also noteworthy as in volume terms it was the fastest-growing AEA member carrying 3.77 million more passengers in 2010 than in 2009. Lufthansa, with growth of 6.5% saw its passenger numbers increase by almost 3.5 million. 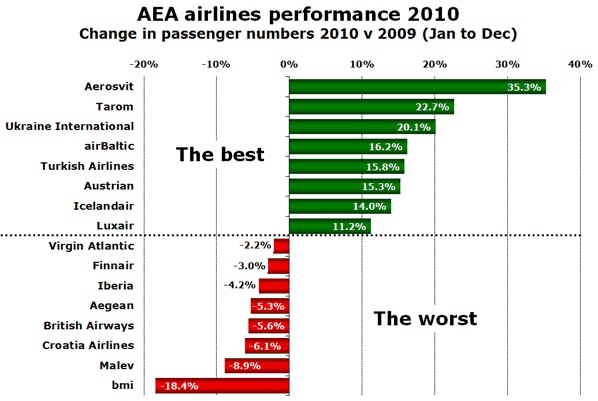 At the other end of the scale, British Midland International saw passenger numbers fall by 20% as its new owners Lufthansa started to impose major changes at the airline. The UK’s other two AEA members, British Airways and Virgin Atlantic, also both saw a reduction in annual passenger volumes. 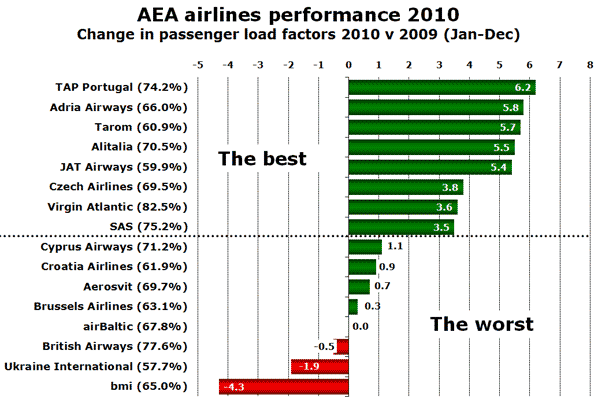 Restraint in capacity growth meant that all but three AEA members saw their annual average load factor increase. Five carriers even managed to see their load factor improve by more than five percentage points with TAP Portugal reporting the biggest improvement from 68.0% to 74.2%.

Since the beginning of the year airberlin has become a member of the AEA, which along with its membership of the oneworld alliance is further evidence (if any were still needed) of the airline’s move ever further away from its ‘low-cost’ roots.