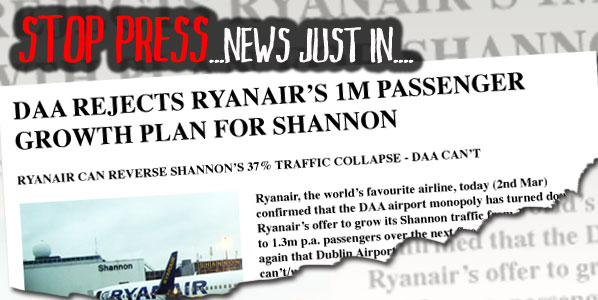 The recent war of words between Ryanair and the DAA over Shannon has been much publicised, but lacks the full background to the conflict. anna.aero has looked into the developments at the airport and our research shows that Ryanair has operated to almost 50 destinations from the airport in the west of Ireland at one time or another.

The recent high-profile and on-going ‘discussions’ between Ryanair and DAA regarding Shannon Airport seemed like a perfect opportunity for anna.aero to undertake some analysis and reveal some facts and figures that neither party seems to have felt necessary to present to a wider audience. Shannon Airport in the west of Ireland serves the city of Limerick (and surrounding area) and between 2000 and 2004 it consistently handled around 2.4 million passengers. A deal with Ryanair in 2005 resulted in traffic growing by 50% in just two years. Almost 50% of this growth came from the increase in UK routes while a further 30% came from routes to Continental Europe. 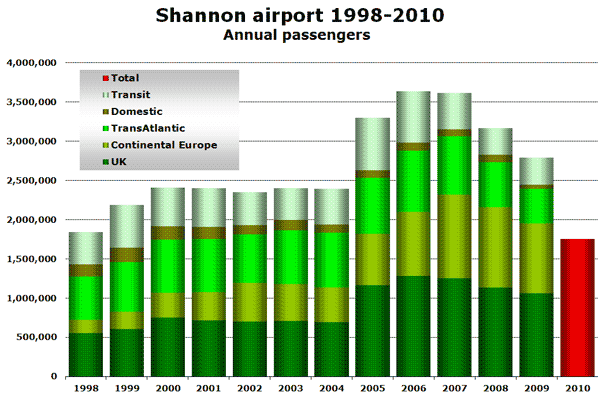 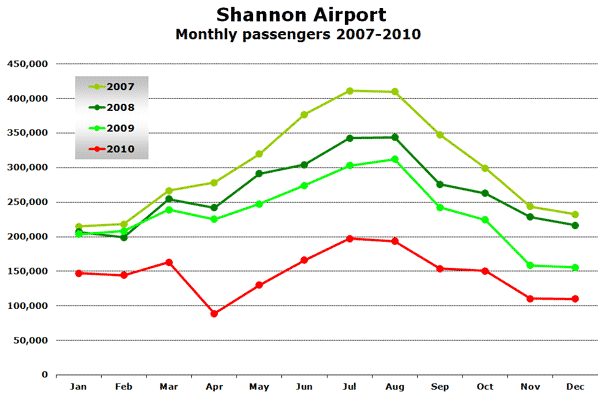 According to the DAA, year-on-year passenger numbers will continue to be negative during the first quarter of 2011 but thereafter will be positive.

According to anna.aero’s research, Ryanair has, at one time or other, operated non-stop flights to almost 50 destinations across Europe from Shannon. The number of destinations served at any one time peaked in 2008 at around 30. Between the summer of 2009 and 2010, Ryanair reduced its network from 25 destinations to just 10. The 15 dropped routes are summarised in the following table:

As a result of these network changes, Ryanair’s destinations this summer are limited to Liverpool, London Gatwick, London Stansted, Malaga, Nantes, Palma de Mallorca and Wroclaw, plus several destinations in the Canary Islands.

The four routes to the UK dropped by Ryanair were all replaced relatively quickly with Aer Lingus Regional services, operated by Aer Arann’s ATR 72s. Although the routes have now returned, weekly capacity is much lower with 70-seat turboprops replacing 189-seat jets. So far during the winter season, Ryanair has re-started services to Gran Canaria and Lanzarote in the Canary Islands, while Aer Lingus has started flying to Paris CDG, replacing the Air France service that was discontinued.

From the beginning of the summer season, Aer Lingus will be picking up Edinburgh services that Ryanair dropped this winter (again operated by Aer Lingus Regional), as well as starting a new daily service to London Gatwick using its own A320s.

To follow the fortunes of the airport over the coming months, remember to check out anna.aero’s unique, free, downloadable spreadsheet of monthly traffic and trend data for over 300 European airports.