TAV Airports opened the new Enfidha International Airport in October 2009. In April last year, Nouvelair launched flights from the airport near the tourist resorts around Hammamet to Brussels and Tunisair has announced plans to launch several new weekly routes in April from Enfidha to German destinations (Berlin, Düsseldorf, Frankfurt, Hamburg and Munich).

After the overthrow of the Tunisian government in January, the future for inbound tourism remains somewhat uncertain. Up until last year, Tunisia’s three main airports at Tunis, Monastir and Djerba (all of which handled between two and five million annual passengers in 2009) accounted for over 97% of the country’s air traffic. At the end of 2009, a new airport at Enfidha (located between Tunis and Monastir) was opened. The airport is operated by TAV of Turkey and is expected to take traffic from Monastir as it is closer to some of the major tourism resorts around Hammamet. 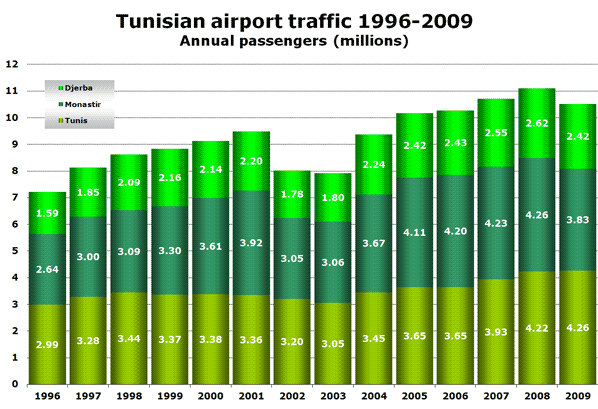 The dip in passenger numbers in 2002 and 2003 can be partly explained by a Djerba terrorist attack in April 2002. Passenger numbers in Tunisia fell by 5% in 2009, although the largest international market of France was down a modest 1.6% to 3.67 million according to DGAC figures. However, there are indications that 2010 saw a significant improvement. The UK market (which ranks third behind the French and German markets) saw passenger numbers increase by 26.6% to 737,980 according to UK CAA data.

Unlike its westerly neighbour Morocco, which has an open-skies agreement with the European Union and has thus seen a surge in low-cost flights from Europe, the Tunisian market is more tightly controlled. However, during 2010, Transavia.com began serving Monastir from Marseille, while Jet2.com started low-frequency flights from its UK bases at Leeds/Bradford, Manchester and Newcastle.

Although the recent political upheaval has created some concern among airlines and tour operators, the new Enfidha airport is still expecting many new services operated by European charter airlines to start in May and June, many of which will have been transferred from Monastir airport (which is now also run by TAV).

However, Tunisair has also announced plans to operate several new routes on a weekly basis during the summer season to German destinations (Berlin, Düsseldorf, Frankfurt, Hamburg and Munich) from Enfidha, all from the beginning of April.