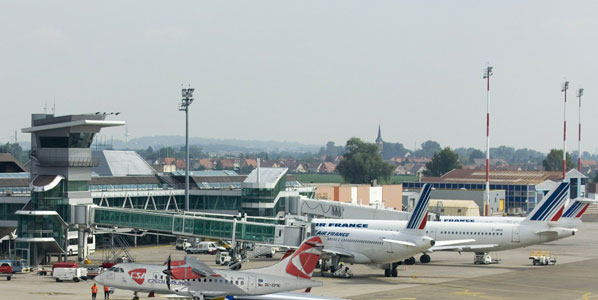 In Strasbourg, Air France dominates with 76% of the airport’s seat capacity this August, and 25% of the airport’s capacity is still allocated to flights to Paris, in spite of competition from high-speed rail. For international routes, French regional airports to a large extent rely on foreign carriers.

Air France’s network strategy is focused on treating Paris as a hub, especially for feeding domestic passengers onto international flights. As a result, the airline’s presence at French regional airports (those outside of Paris) is limited primarily to domestic operations dominated by services to Paris. Examining the markets served and carriers at the 12 busiest French airports outside of Paris (from Nice with 9.6 million passengers in 2010 to Biarritz with just under one million passengers) reveals some fascinating results.

Of the 12 airports examined, nine have at least 45% of their capacity allocated to domestic routes, while four of these have 40% or more of seats flying to just one destination, Paris. 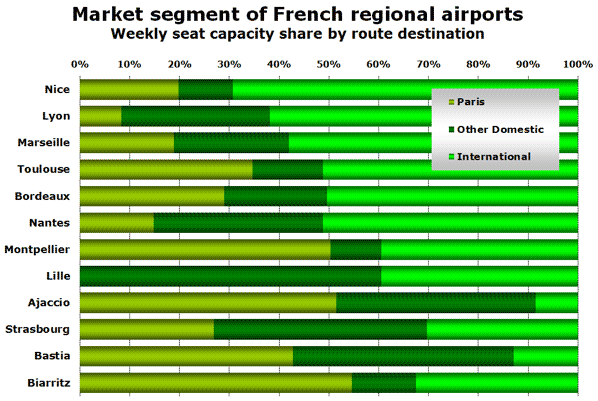 The smaller the airport, the more dominant domestic flying becomes. Only the top three of Nice, Lyon and Marseille have at least 55% of all scheduled capacity flying to and from foreign destinations. Ajaccio and Bastia on the island of Corsica have less than 15% of scheduled capacity operating to destinations outside France. Lille, which only is around 200 kilometres from Paris, is the only one of these larger regional airports not to have direct flights to Paris.

In recent years, the TGV high-speed trains have diverted some domestic passengers travelling to/from Paris from air to rail, but even Strasbourg, which has seen traffic fall on the Paris route by over 50%, still has over 25% of its route capacity serving the capital. With Air France having 80% of the French domestic market, this results in the airline having a major presence at these airports. At eight of the 12 airports, Air France’s market share is over 40%, peaking in Strasbourg at 76%. Only at Nice (21%) and Marseille (27%) does Air France have less than 30% of all capacity.

An analysis of the scheduled international services at these regional airports presents a very different picture. Weekly one-way seat capacity on international flights ranges from 103,201 at Nice to just 1,736 at Ajaccio. Air France has no scheduled international flights from three of the 12 airports examined and only in Strasbourg does its market share exceed 15%. Three years ago, Air France had a much more extensive network of international routes from Lyon, but has since dropped services to Frankfurt, Madrid, Munich and Zurich; while flights to Birmingham, Düsseldorf and Hamburg which operate for most of the year, do not operate at all in August. 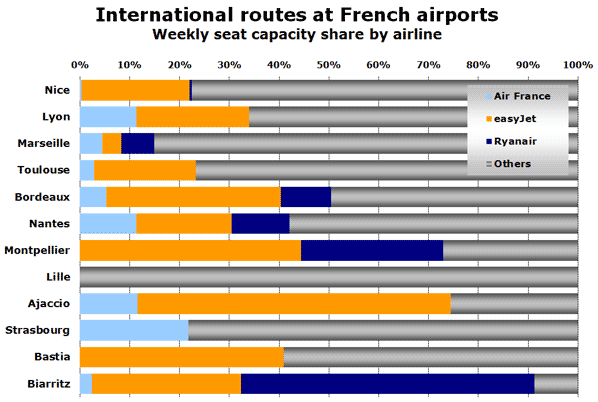 Conversely, easyJet has at least a 20% share of international capacity at nine airports while Ryanair has at least a 10% share at four airports. Ryanair’s market share of international services at Marseille is probably higher than indicated from the data as the airline recently re-introduced several routes for the peak summer period (mid-April to end of August) but using non-based aircraft.

In the UK, where British Airways also has a minimal presence on international routes from regional airports, the difference is that UK-based scheduled and charter airlines (and Ryanair) dominate international services rather than mainland European carriers, suggesting that the UK regions tend to ‘export’ more passengers, while French regional airports focus on ‘importing’ passengers.