Dutch airports recover as departure tax is abolished; traffic up 4.7% in 2010; Eindhoven and Maastricht up over 20% The UK is by far the top country market from the Netherlands. 22 British airports are served from Amsterdam, including Liverpool, for which the airport and KLM here are seen celebrating the fourth daily frequency, which was added last year.

The Dutch government’s departure tax on air passengers operated from July 2008 to June 2009. Since then, air passenger numbers have recovered and in 2010, Amsterdam Schiphol airport reported traffic growth of 3.8%, while the regional airports at Eindhoven and Maastricht reported passenger number increases of 25.2% and 30.6% respectively. 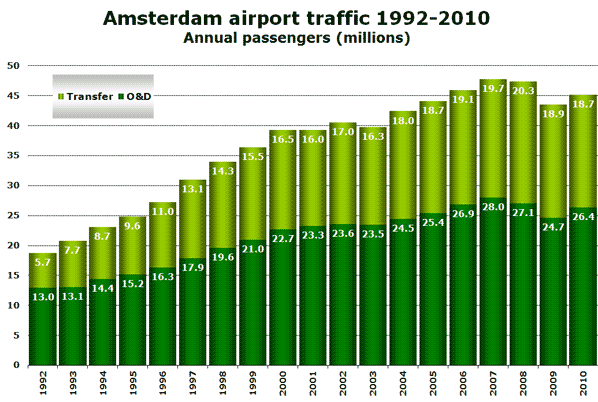 Amsterdam not the only Dutch airport

Apart from Amsterdam, there are currently four other Dutch airports with scheduled services; Eindhoven, Groningen, Maastricht and Rotterdam. In 2007, Eindhoven overtook Rotterdam to become the country’s second busiest airport in passenger terms, and by 2010, it was handling twice as many passengers. 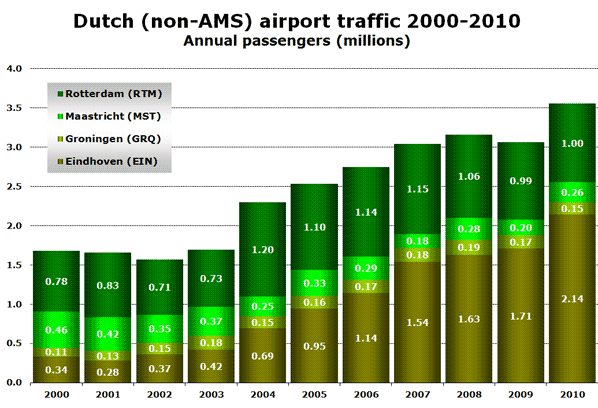 Eindhoven has embraced low-cost carriers and will this summer serve over 40 destinations with scheduled services, of which 20 are provided by Ryanair, 14 by Transavia.com and 10 by Wizz Air. Rotterdam is served primarily by Transavia.com with 19 routes, but Air France offers ‘business’ services to London City. Seven of Maastricht’s 10 scheduled services are provided by Ryanair, two by Transavia.com and one by germanwings. In response to the German ‘eco-tax’, germanwings has decided to introduce flights from Berlin to Maastricht as a potentially cheaper alternative to Cologne/Bonn. Finally, Groningen has scheduled services to Aberdeen with bmi Regional, linking two major oil-related cities together. A new carrier, GLM, is apparently looking to start direct services from Groningen to Southend airport (near London) some time this summer.

UK and US are leading country markets

The UK is by far the leading country market for scheduled flights from Dutch airports. No less than 22 UK airports have direct flights to Amsterdam operated by a range of carriers, including Air France, bmibaby, British Airways, easyJet, Flybe, Jet2.com and KLM. The US is the second biggest country market, with KLM and its SkyTeam partner Delta operating the majority of services. Eighteen different US gateways are served with Continental, United and US Airways also present. 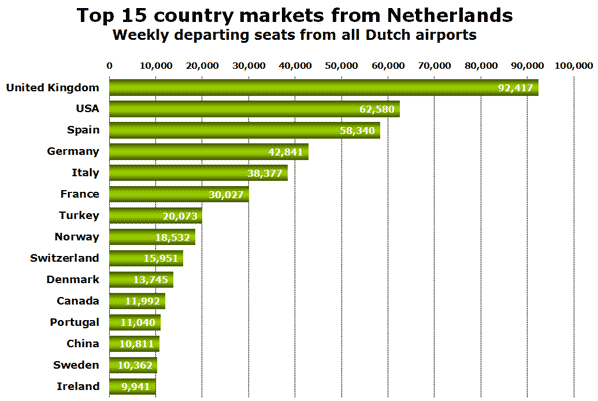 While most of the remaining top 15 country markets are in Europe, Canada (11th) and China (13th) also make the list. This August, KLM will be serving Beijing, Chengdu, Hangzhou, Shanghai and Xiamen non-stop from Amsterdam, while fellow SkyTeam member China Southern also operates flights from Beijing and Guangzhou to Amsterdam.

KLM and partners have over 60% of capacity

Although 90 airlines serve the Dutch market, KLM, Air France, Transavia.com (which KLM owns) and Delta (its SkyTeam partner) share just under 62% of scheduled capacity. The leading non-KLM associated airlines are easyJet and Ryanair.

easyJet currently operates to Amsterdam from eight UK airports, two airports in each of Italy, Spain and Switzerland, as well as Berlin, Prague and Split. Ryanair operates 20 routes to Eindhoven and seven to Maastricht, mainly from its bases in Italy and Spain.