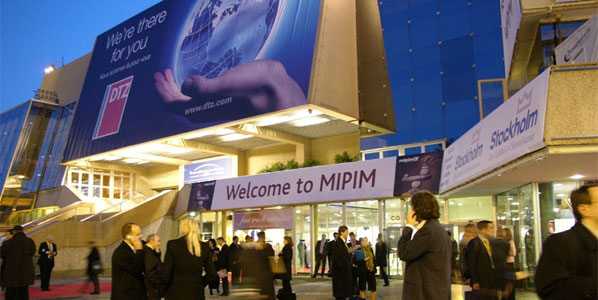 How much did these MIPIM delegates pay to get to Cannes this week? easyJet has charged up to £350 one-way for flights from London Luton to Nice and return flights on Friday have been over £400 for well over a month.

A good airline revenue manager knows when there are special events that can be treated differently, and where higher than usual demand can be managed by raising fares. Good examples of this are school holidays and sporting events.

Another example that anna.aero became aware of a few years ago is the annual MIPIM show and conference, described as ‘The world’s premier real estate event for professionals’, which takes place each year in mid-March in Cannes on the south coast of France, close to Nice. This year’s event runs 8-11 March and anna.aero has been tracking fares on easyJet’s daily (except Saturday) service between London Luton and Nice for several weeks to see how fares for flights around these dates have evolved.

Note: All fares quoted here are the basic one-way fares which do not include any charges for luggage, Speedy Boarding, travel insurance, any sports equipment or relevant credit/debit card fees. 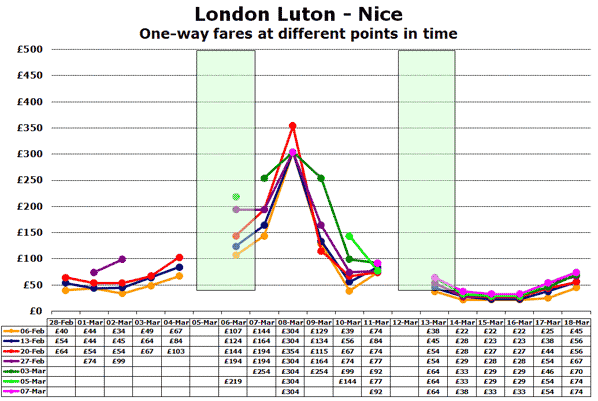 In the week prior to MIPIM, outbound fares barely reached £100, even though Monday, Thursday and Friday flights appear to have sold out before the day of departure. However, for the flight on the day of the event’s opening, the available fare during February and early March varied between £300 and £350. Interestingly, after peaking on 20 February at £354, the price was subsequently lowered to £304 and even the day before departure, this fare was still available. However, the Wednesday flight seems to have sold out a few days before departure. Another oddity, is that the Monday (6 March) flight appeared to be sold out on 3 March, but was available once more on 5 March. 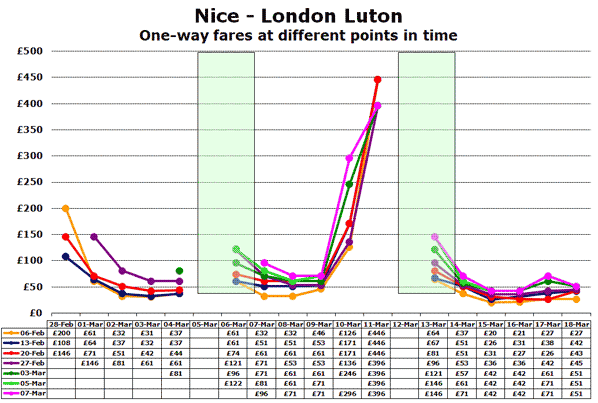 With no Saturday service, the Friday return flight has been priced at over £400 for well over a month, again peaking at £446 on 20 February, before subsequently falling slightly to £396. Since the beginning of February, the Thursday evening return flight has risen in cost from £126 to £296, although when checked on 5 March, the flight appeared to be sold out before re-appearing again on 7 March.

We would love to know if any of our readers have seen (or even paid) one-way fares in excess of £500 (€600) for a flight on a low-cost airline in Europe. Alternatively, if you know of any special events that you would like us to do a ‘farewatch’ on, please let us know in the comment section below.