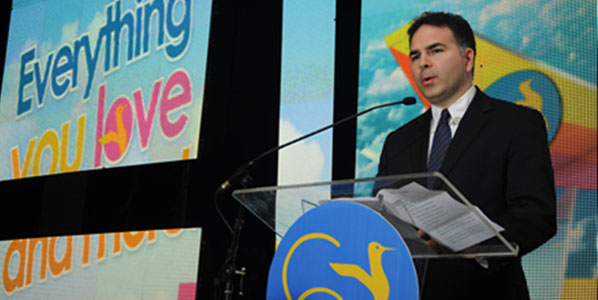 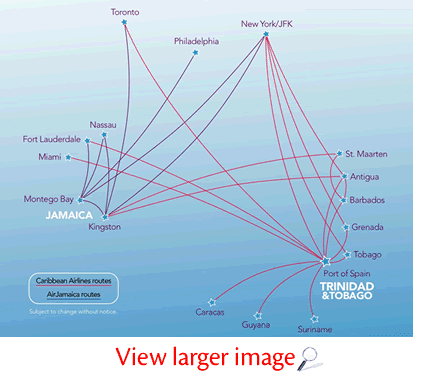 In May last year, Trinidad & Tobago’s national carrier Caribbean Airlines – the successor of BWIA – took over the struggling Air Jamaica; however, the decision has recently been made for the two brands to continue to be operated separately.

Both airlines have suffered from falling passenger numbers in recent years, but the new, combined airline ranks as the second-largest carrier by seat capacity in the Caribbean market, after American Airlines, but ahead of LIAT and jetBlue.

While the two merged airlines’ networks complement each other, being based in the Lesser and Greater Antilles respectively, the airlines’ main bases are no longer connected, as Port of Spain lacks flights to either Kingston or Montego Bay. However, Caribbean Airlines serves Kingston from St Maarten and Antigua and the two airlines’ networks also meet at Toronto Pearson, New York JFK and Fort Lauderdale.

13 of the airlines’ routes are also operated by competing airlines, while the remaining 15 routes are monopolies for Caribbean Airlines and Air Jamaica. 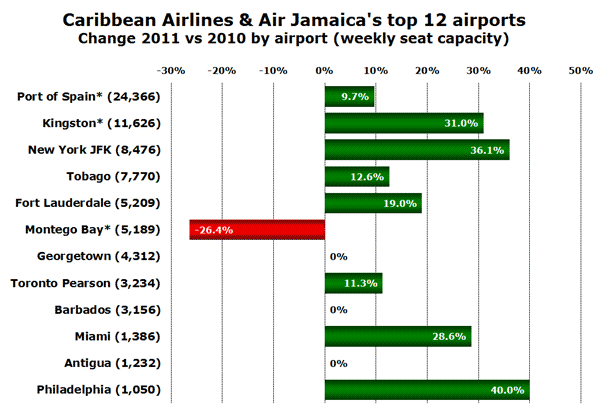 Of the two airlines’ nine axed routes in 2010, all involve Air Jamaica’s bases at Montego Bay and Kingston. From both airports, flights to Havana and Curacao have been suspended, while from Montego Bay only, routes have been dropped to Baltimore/Washington, Chicago O’Hare and Orlando in the US and Nassau in the Bahamas. Meanwhile, Kingston has lost its flights to Port of Spain. Partly as a result of this, Air Jamaica’s capacity is currently scheduled to be 10% lower for 2011 than the previous year, while Caribbean Airlines leaves its overall seat capacity unchanged.

The airlines’ now only four US destinations all feature in the list of top airports and have seen healthy capacity increases in the last year, notably enabled by both Trinidad & Tobago and Jamaica now have Open Skies agreements with the US.

In spite of the regional consolidation, major expansion is planned for the two airlines in 2011. Although they have no new routes on sale, it was recently revealed that there are plans to lease 777 aircraft from as soon as July this year. Full details about the relaunched long-haul operations are not yet available, but the airline’s chairman George Michael Nicholas III has indicated that from Jamaica, three to four weekly London flights are to be expected, stating that Heathrow is the airline’s “airport of choice”. Caribbean Airlines has also ordered four 787 aircraft from ILFC, which are to replace the 777s.