US carriers are still planning a whole raft of new routes this year, despite on-going uncertainty in the Middle East and fuel price rises that have caused some US airlines to re-examine their capacity allocations for this summer.

According to anna.aero’s research, almost 200 new routes have already been announced or started by US carriers in 2011, of which 37 began operating in January and February. Another 153 are slated to begin between the beginning of March and the end of June, with just two new routes already announced to start in the second half of the year. 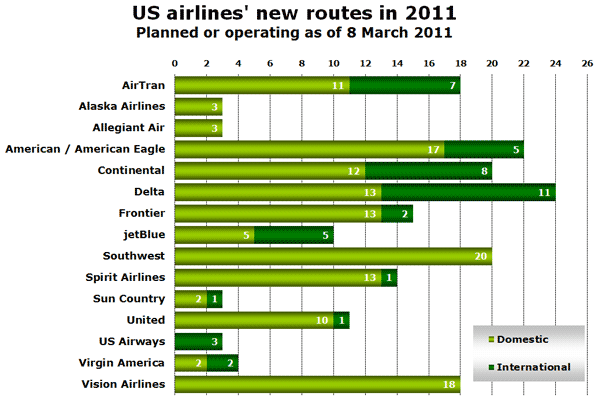 In addition to the airlines in the graph above, Branson Air Express and Hawaiian Airlines are both also down to start two new routes each in 2011. Exactly three-quarters of the new routes are domestic operations while the remaining 48 new routes are international services.

A comparison of scheduled capacity currently planned for this August compared with last August reveals that all but two of the leading carriers operating international services to and from the USA are planning to grow this summer. 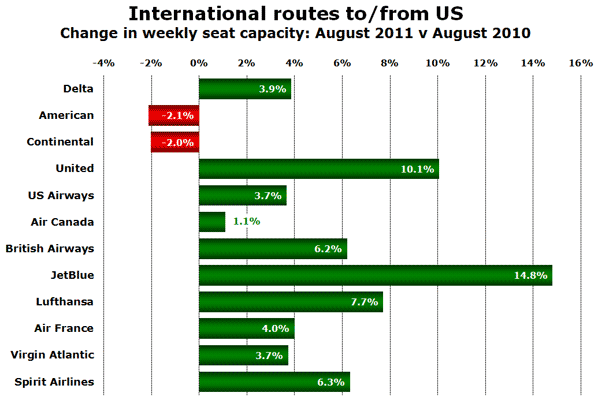 The two notable exceptions are American Airlines and Continental, although Continental’s merger partner United is growing by 10%, so that overall, the new combined entity will be growing internationally this summer. American’s cutbacks mean that Delta becomes the #1 carrier in terms of capacity on international routes to and from the US this summer, though further capacity adjustments may yet result in the order being reversed. The fastest-growing airline in the US international market this summer is jetBlue, which continues to add routes to the Caribbean.

Overall, international capacity is up an estimated 2.4% this summer, despite the fact that one of last year’s top 12 international airlines (Mexicana) has since collapsed. They are replaced in the top 12 by Spirit Airlines, which operates an extensive Caribbean and Latin American network almost exclusively from Fort Lauderdale.

To examine in more detail which US airlines are starting services when and from which airports, check out our free, downloadable spreadsheet that we update on a regular basis.