Nashville’s latest Southwest routes to South Caroline were celebrated at the gate area of the airport serving ‘Music City’. Southwest dominates the airport with almost 60% of all scheduled seat capacity.

Serving America’s self-proclaimed “Music City”, Nashville International Airport, located at Berry Field (hence the BNA code), has handled between eight and 10 million passengers per annum for most of the past decade. Last year, the figure was 9.1 million, up 1.6% on 2009. The airport’s route network is dominated by Southwest, which operates over 40% of all flights, but accounts for almost 60% of all scheduled seat capacity. This week has seen the carrier launch routes to its two newest destinations in Greenville-Spartanburg and Charleston, both in South Carolina. This brings the airline’s network to 30 destinations from Nashville.

The airport is also served by all of the remaining US legacy carriers, which operate services to their hubs with a mix of full-size aircraft and smaller regional jets. Delta with nine routes (including a weekly flight to Cancun in Mexico) offers the next highest number of flights and destinations, followed by American Airlines with seven destinations (including a new service to New York JFK starting on 4 April). The only other carriers present this summer are Air Canada (twice-daily flights to Toronto, the airport’s only daily international service), Frontier Airlines (to Denver and Milwaukee), and Pacific Wings (which operates 9-seater Cessna 208Bs to three destinations). 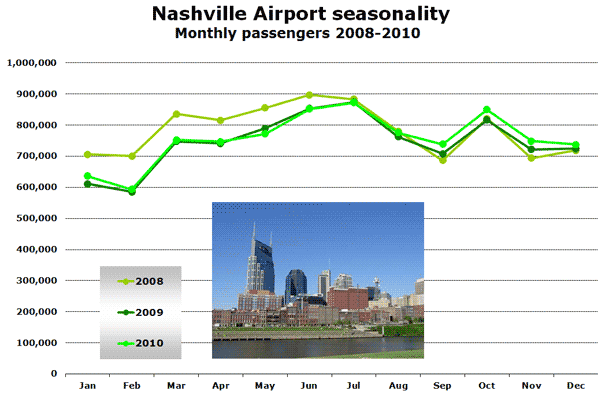 The airline’s seasonality profile has been remarkably stable during the last two years with demand peaking in June, July and October.

Charlotte is shortest and most expensive route

Using data compiled by the US Department of Transportation’s Office of Aviation Analysis, anna.aero has plotted the average fare on each route during the third quarter of 2010 against the route’s sector length. On the whole, as would be expected, average fares increase with sector length but there are a few notable outlier points. 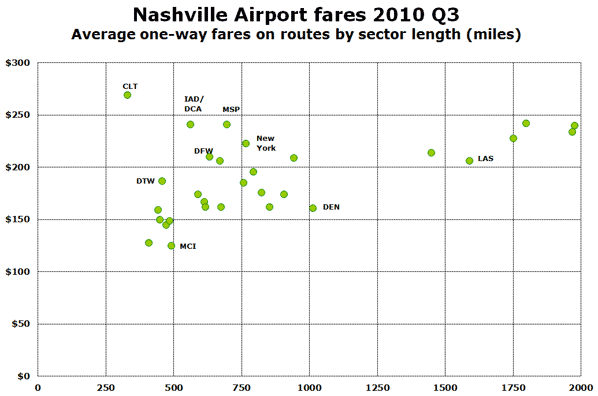 Source: US DOT Office of Aviation Analysis data for 2010 Q3

Incredibly, US Airways’ route to Charlotte is not only the shortest sector (329 miles) for which data is available, but also the most expensive ($269). In fact, during the third quarter of 2010, it was the most expensive route anywhere in the US with a sector length of between 301 and 350 miles. Atlanta, which is the airport’s busiest route, is just over 200 miles from Nashville but does not appear in the US DOT analysis.

Other notably pricey destinations are Dallas/Ft Worth (American), Detroit (Delta), Minneapolis/St Paul (Delta) and Washington (American, United and US Airways). Among the best value for money routes are Denver (Frontier, Southwest and United) and Kansas City (Southwest). Despite Southwest’s considerable presence, for the airport as a whole, the average one-way fare at the airport is $190, resulting in the airport ranking as the 44th most expensive airport for passengers in the US (out of 121) with an average fare premium of 2.5%.

No services (yet) to San Francisco or Boston

Last month, the airport published the results of a survey distributed to members of the Nashville Area Chamber of Commerce, looking at current and possible future air service links. This revealed that the three most requested domestic destinations not currently served non-stop were San Francisco, Boston and Richmond. London topped the ‘international destination that passengers would be most likely to visit’ list.