Ryanair serves 19 destinations from Slovakia; ice-hockey world championships will boost traffic in April and May The most recent airline to begin serving Slovakia was Armavia, which connected its Yerevan base with Bratislava in January. Armenian dancers entertained the local press as the airline arrived in the Slovakian capital.

Since the demise of SkyEurope (a low-cost airline that miraculously survived for over seven years without ever coming close to reporting an annual profit) at the end of August 2009, Slovakia’s air transport market has been heavily reliant on foreign carriers to provide air transport services. Passenger traffic across the country’s three main airports at Bratislava, Kosice and Poprad-Tatry peaked in 2008 at just under three million passengers across all airports. In 2009 and 2010, this figure fell to around two million passengers, with Bratislava’s share rising from 81% in 2009 to 85% in 2010. Passenger traffic should get a boost in late April and May when Slovakia hosts the 75th Men’s Ice Hockey World Championships with 56 matches being shared between stadia in Bratislava and Kosice. 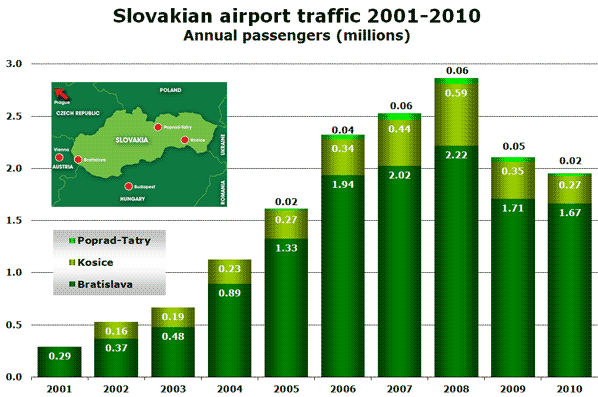 Traffic demand peaks in July and August, at levels almost three times higher than in the off-peak month of February. As at many European airports in 2010, the Icelandic ash cloud saga in April resulted in an estimated loss of 20% of traffic for that month. 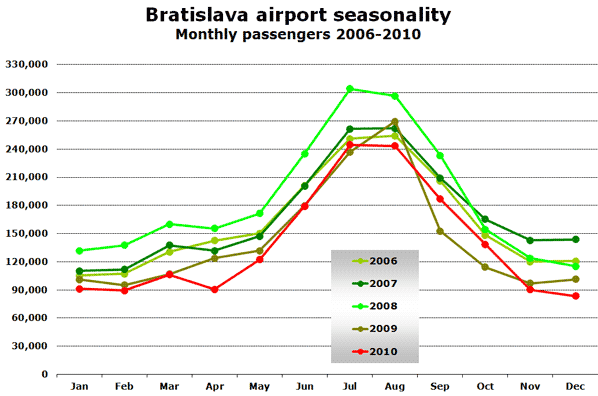 Sine the beginning of 2010, there have been a number of new routes offered from Bratislava. 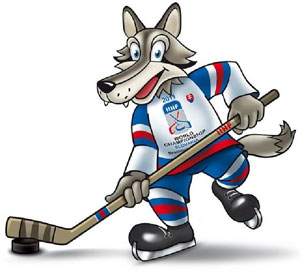 Goooly is the name of the official mascot (a gray wolf) of the 2011 Ice Hockey World Championships taking place in Slovakia at the end of April. The Czech Republic are the defending champions, having beaten Russia to win the title for the sixth time in Germany last year.

A comparison of schedule data for June 2010 and June 2011 reveals that Ryanair has cut its routes from Bratislava to Bologna, Bari and Pisa, while local carrier DanubeWings no longer operates flights to Basel or Catania. As a result of capacity and frequency reductions on a number of surviving routes, this summer’s scheduled capacity appears to be around 10% down on 2010.

Central Europe’s biggest home-grown LCC, Wizz Air, has so far studiously avoided the Slovakian market apart from a brief experiment in late 2009 when it served Rome Fiumicino from Bratislava. In June last year, Bratislava inaugurated its new, state-of-the-art terminal where Ryanair is the dominant carrier.