Ahead of the Cheltenham Festival, Ryanair celebrated reaching six million passengers at Bristol Airport on 14 March. The retired police horse Monty celebrated with Ryanair’s sales and marketing executive Maria Macken and Bristol Airport’s aviation director Shaun Browne. Macken handed over a bottle of champagne and flight vouchers for two flights to Valencia to the lucky passenger Keely Jarvis. It is unclear how much Jarvis paid for her flight, but last minute fares reached €195 one-way excluding taxes and fees.

Following last week’s look at easyJet’s ability to exploit periods of increased demand, this week anna.aero examines how Ryanair’s fares have evolved in the last couple of weeks to take advantage of the Irish love of horse racing. This week’s four-day Cheltenham Festival (15-18 March) celebrates its centenary and the event includes the Ryanair Chase, which takes place at 2.40pm on Thursday 17 March. The nearest airport to Cheltenham (according to The AA’s online route planner) is Bristol (55 miles/88km), just beating Birmingham (58 miles/93km). During the winter season, the Dublin – Bristol route is served with between two and three daily flights, but Ryanair has added some additional flights especially to cater for the festival.

Note: All fares quoted here are the basic one-way fares that do not include any taxes/fees, charges for on-line check-in, luggage, priority boarding, travel insurance, any sports equipment or relevant credit/debit card fees (see table below). 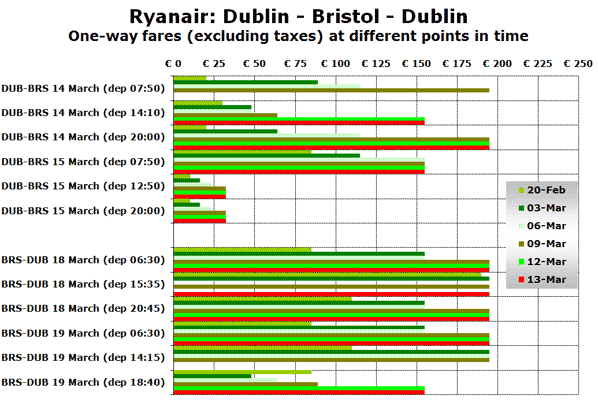 As can be seen from the graph. the basic one-way fare reached a maximum of €195 for both the outbound and return flights. As with last week’s easyJet analysis, one flight (the Bristol – Dublin flight on 18 March at 15:35) appeared to sell out before becoming available once again a day later. The sudden drop in fares after the Tuesday morning departure is notable.

If the most expensive flights are selected, then the basic return fare is €389.98. However, on top of that, there are likely to be a number of unavoidable charges as well as some discretionary charges depending on the individual passenger’s needs.

Assuming a passenger has a moderately heavy suitcase, wants priority boarding and pays using one of the most common payment cards, then the fare will increase by €153.78, bringing the total fare to €543.76. While this is cheaper than last week’s easyJet example (London Luton to Nice return), it is worth noting that the sector length for Luton – Nice is almost 1,100 kilometres, while the Dublin – Bristol route clocks in at around 330 kilometres, less than one-third of the distance.