In September last year, Emirates began operating the A380 on its route between Dubai and Manchester, the biggest international route at any UK regional airport. The success, which was celebrated by Emirates’ VP UK & Ireland Conrad Clifford and footballer Alan Hansen, continues, as the airline now has announced further increase by adding a third daily frequency. Meanwhile, its fellow MEB3 airlines Etihad and Qatar Airways are doubling frequencies from each once to twice daily.

While total UK airport traffic declined in 2008 (by 1.9%), 2009 (by 7.2%) and 2010 (by 3.4%), one market has continued to grow throughout this period. Passenger numbers to the three major Middle Eastern hubs operated by Emirates (Dubai), Etihad (Abu Dhabi) and Qatar Airways (Doha) have continued to rise inexorably. 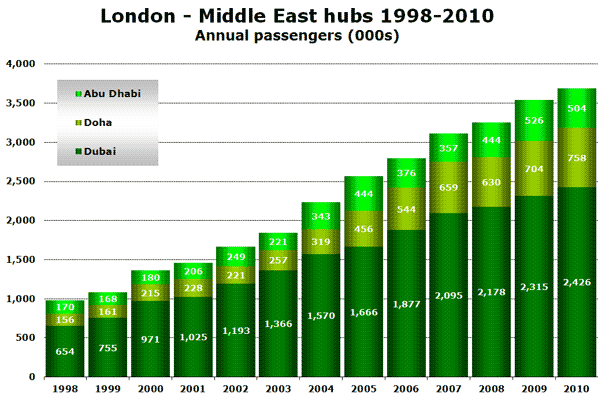 Between 1998 and 2010, traffic from London to the home bases of the ‘MEB3’ carriers has grown from under one million annual passengers to over 3.5 million in 2010 with no year-on-year declines during that period. Dubai remains the dominant market, accounting for around two-thirds of the three markets’ total, followed by Doha and Abu Dhabi. 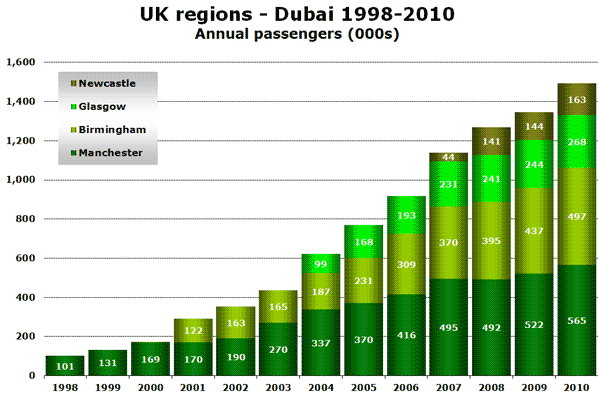 Last September, Manchester became the first regional airport anywhere in the world to be served daily by an A380, when Emirates assigned the aircraft to one of its two daily flights.

MEB3 carriers all target Manchester in 2011

In the last few weeks, all of the MEB3 carriers have announced additional frequencies on their Manchester route. Emirates will be increasing frequency from twice-daily to three-times daily from 1 May, although capacity will only be increased by 25%. Qatar Airways recently announced that it was moving its London Gatwick service to Manchester, enabling it to add a second daily flight from 1 June, while Etihad Airways is also increasing its offering from a single daily flight to two daily flights, but not until 1 August. 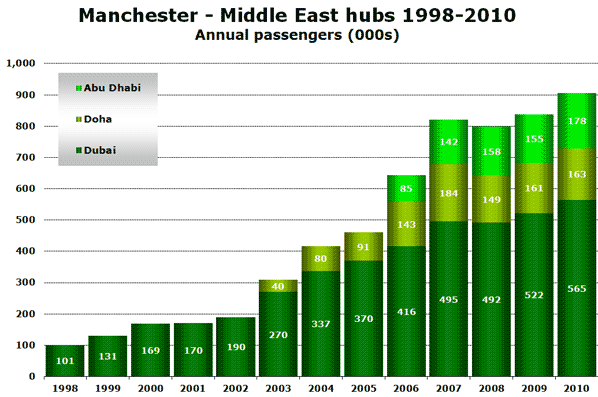