As the start of the summer season moves ever closer, anna.aero this week takes a look at which are the leading international air travel markets within Europe and how these are served. Using schedule data for the first week in August the top 15 country-pairs have been identified and ranked in terms of weekly departing seat capacity. It will come as no great surprise that the two largest international markets during the peak summer, holiday season both involve Spain, with the UK market over 50% bigger than the German market. 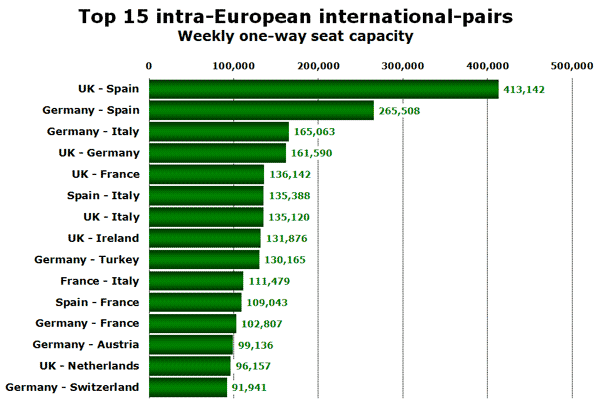 Irish carriers have over 90% of UK-Ireland market

A closer look at these leading country-pair markets by nationality of airline reveals some interesting patterns. Since European liberalisation of the air travel market in the 1990s any European carrier can serve any airport-pair anywhere within Europe. As a result several country-pairs now have a significant share of their seat capacity provided by airlines that are not based in either country. Irish-based Ryanair and UK-based easyJet have pan-European networks featuring multiple bases outside of their home countries. 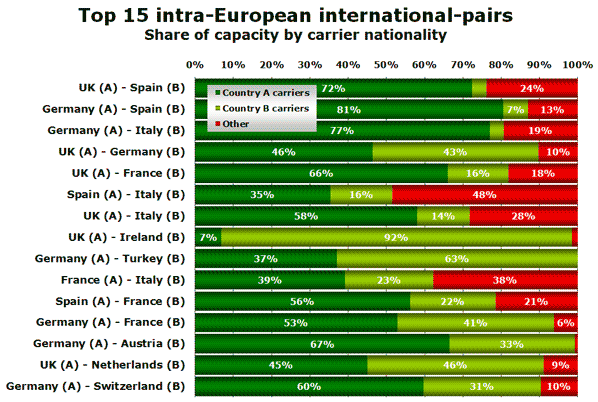 ‘Foreign’ carriers have made the biggest impact in the Italy – Spain market, where Ryanair and easyJet between them now control almost 50% of available seat capacity, and between France and Italy where again, easyJet and Ryanair have helped ‘foreign’ carriers to grab almost 40% of the market.

Analysis of the data also reveals the following points of interest: