The recent decision by the European Commission not to approve the merger of Aegean Airlines and Olympic Air was a major disappointment to both carriers, but while the airlines appeal the decision, life goes on and both carriers have made significant changes to their networks for the upcoming summer season.

Aegean also reported that it made a €23 million net loss in 2010 as revenues fell by 5% to €591m. International passenger numbers rose 9% to 3.06 million, while domestic passenger numbers fell 16% to 3.17 million. Meanwhile, Olympic Air has announced a new partnership with Cyprus Airways.

Last year’s civil unrest in Athens as a result of the introduction of major austerity measures took less of a toll on tourism than might have been expected. While passenger numbers at Athens airport (which accounts for around 40% of all Greek airport traffic) were down almost 4% for the year as a whole, passenger numbers at the country’s other airports, which are supported mostly by inbound leisure traffic, were down by only around 1%. 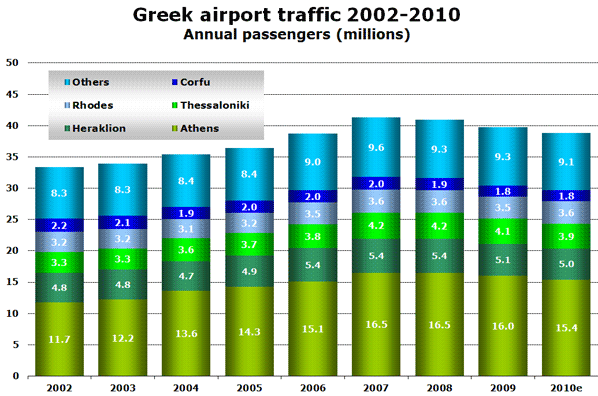 Source: Hellenic Civil Aviation Authority and anna.aero estimates based on available data for January to October.

A closer look at the traffic trends during the last two years at Greek airports shows that in 2009 and early 2010, domestic traffic was growing quite well, partly thanks to additional competition provided by now defunct Athens Airways. However, between June and October of last year, domestic traffic was down between 10% and 15%. Latest figures for Athens airport show that in January 2011 domestic traffic there was down 28%, although the airport explains that this is partly due to the inflated figures for early 2010 which benefited from “extremely low discounted fares and offers by the two home-based carriers and operational disruption of the Athens – Thessaloniki National Road”. 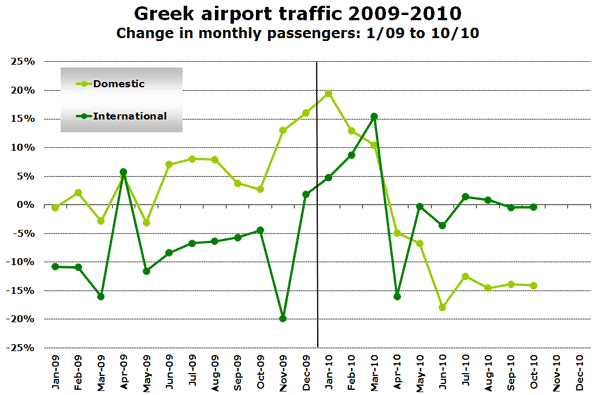 International passenger numbers held their own during the summer months, apart from in April when the Icelandic ash cloud prevented flights to and from Northern Europe from taking off.

Having dipped a tentative toe into the Greek market last summer, Ryanair is considerably expanding its offering this summer with the introduction of over 20 new routes, bringing to 33 the number it operates from its four Greek airports (Kos, Rhodes, Thessaloniki and Volos). A closer look at new routes planned by carriers for this summer at the six biggest airports outside of Athens (all of which handled well in excess of one million passengers in 2010) shows a raft of new summer leisure routes.

The travel trade is apparently optimistic that Greece may be an ‘in-demand’ summer destination this year after the political problems in Egypt and Tunisia, and the threatened air traffic control strikes in Spain (although the likelihood of these has reduced in recent days). With more and more low-cost carriers adding routes into the market, it seems that the Greek economy may get a considerable boost from increased tourist revenues, even if its two national carriers continue to face uncertain and challenging times.