Cake of the Week:
Azerbaijan Airlines’ Baku to Izmir The cake baked by the TAV associated company BTA Catering, which welcomed Azerbaijan Airlines to Izmir on Turkey’s Aegean coast was, was decorated with the symbol of Baku, the Maiden Tower, and the symbol of Izmir, the Clock Tower. After the cake was cut by Azerbaijan Airlines’ GM Turkey, İlham Asadov, and TAV Izmir’s GM, F.Erkan Balcı, the gentlemen posed in front of the countries’ flags. Out of respect for the Memorial Day held in Christchurch, no celebrations were held as Jetstar Asia was welcomed to Auckland, but these photos were taken of the arriving aircraft. After the Miami-Dade Fire Rescue welcomed KLM back to Miami, the MD11’s thrilled crew was happy to pose for the airport photographer. Initially scheduled to start at the beginning of the summer season, passenger demand – proven via Twitter – called for the route to start earlier. 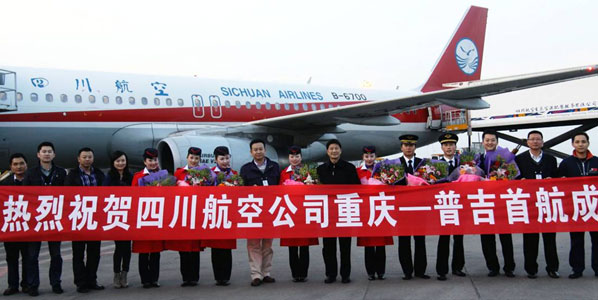 Following the success of Hanoi flights, Sichuan Airlines continued expanding to Southeast Asia out of Chongqing in the southwest of China by adding a route to Phuket in Thailand. Reflecting the route’s instant success, the first flight had an impressive 98% load factor. A different take on what to do with cakes: As Norwich International Airport raised £2,000 for UK charity Comic Relief, custard pies were thrown on the management, including the airport’s CEO Andrew Bell (centre).