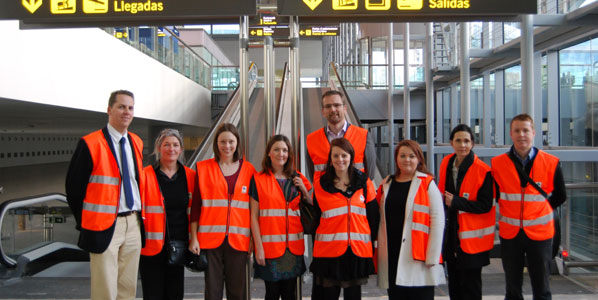 While the opening ceremony for Alicante Airport’s new terminal is today and flight operations begin tomorrow, staff from the British Consulate in Alicante already visited the grand new construction. Although the share of the airport's total passengers travelling to and from the UK has declined in the last few years, the UK country market remains by far Alicante's largest and six further British routes will launch this year.

This week sees the opening of Alicante’s new terminal, which will help the airport (the sixth busiest in Spain on an annual basis) meet the expected growth in demand, especially during the peak summer season. Last year, the airport on Spain’s east coast serving the Costa Blanca region grew by 2.7%, exactly the same as for all airports in Spain. Between 2000 and 2008, passenger numbers grew by almost 60% before the recession in Europe took its toll on leisure traffic in 2009. 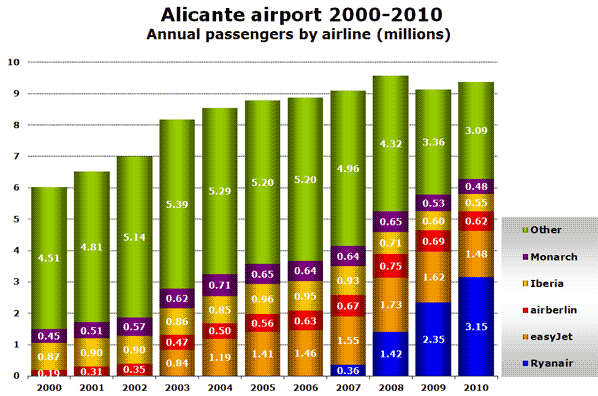 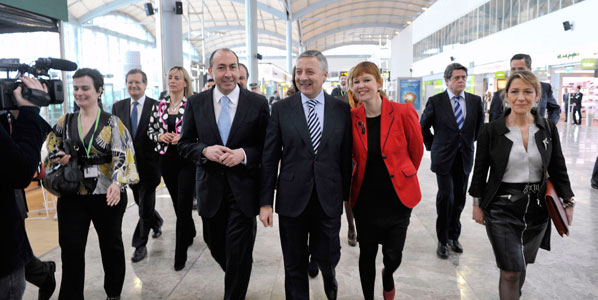 The UK remains the leading country market for flights to and from Alicante. Between 2000 and 2004, the UK’s share of passengers grew from 45% to 55% as the likes of Go and easyJet helped stimulate the market previously dominated by charter airlines. However, since then, the UK’s share of the markets has declined to just 42% in 2010, although that still makes it five times bigger than any other international country market. 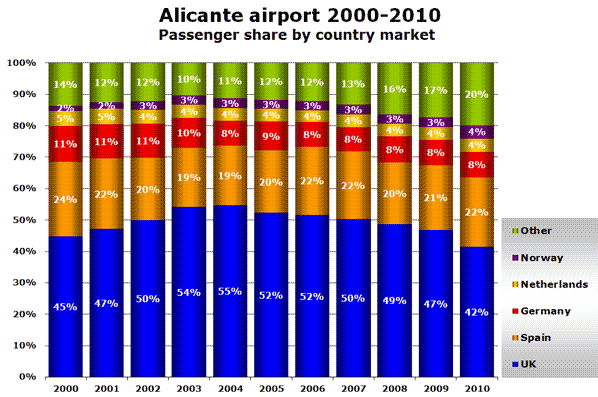 The airport’s international network has become more dispersed. In 2003, the top five country markets of the UK, Spain, Germany, the Netherlands and Norway accounted for 90% of traffic, but by 2010, this had fallen to just 80%, meaning that the number of passengers from outside of these top five markets had doubled from 10% to 20% in just seven years.

A look at monthly passenger figures since the beginning of 2008 shows a consistent seasonality profile with demand peaking in the key holiday months of July and August. 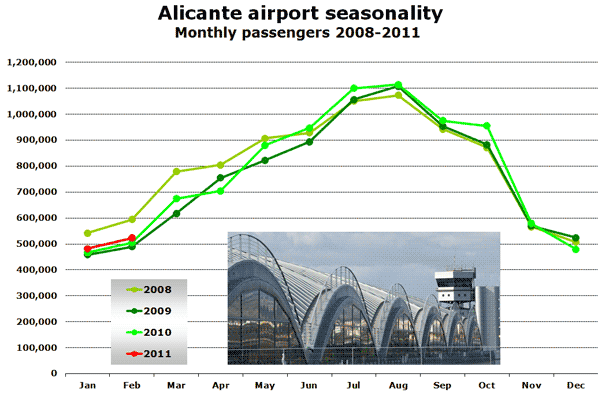 So far in 2011, passenger numbers are up 3% in January and 3.5% in February, suggesting that the airport may be on course to beat its previous annual record and may even exceed 10 million passengers for the first time, assuming that summer flights are not disrupted by industrial action either at the airport, or from air traffic control services.

Despite modest growth of under 3% in 2010, the airport welcomed a host of new services, primarily from low-cost carriers, and in particular Ryanair as it continued to expand its presence at the airport.

So far for 2011, new services from the UK seem to be leading the way, with Jet2.com revealing plans to start low-frequency flights from four of its UK bases this summer, while Ryanair is adding new services from Humberside and Manchester.

Other LCCs adding services this summer include Norwegian, Vueling and Wizz Air, while Icelandair is the only non-LCC to be adding a new service, from Reykjavik.