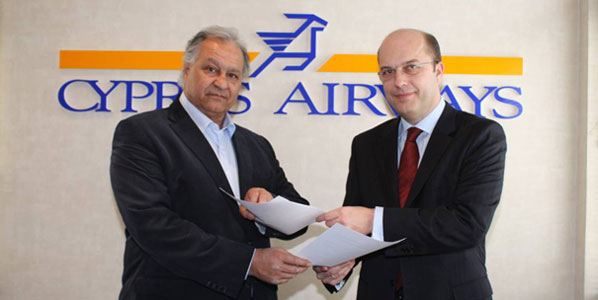 Yesterday, the executive chairmen of Cyprus Airways and Olympic Air, George Mavrocostas and Yiannis Karakadas, announced a new strategic partnership between the two airlines. The announcement comes as both airlines have failed to merge with competing airlines in their home markets; now defunct Eurocypria in Cyprus and Aegean in Greece.

Cyprus Airways, the financially struggling national carrier of Cyprus in the eastern Mediterranean, maintains a fleet of three A319s, five A320s and two A330-200s. This is the result of a recent fleet reduction, which resulted in the airline divesting two of its fleet of A320 aircraft, leaving five of the type in the current fleet.

This week, it was instead announced that Cyprus Airways will form a strategic partnership, including codeshares, with the Greek airline Olympic Air. 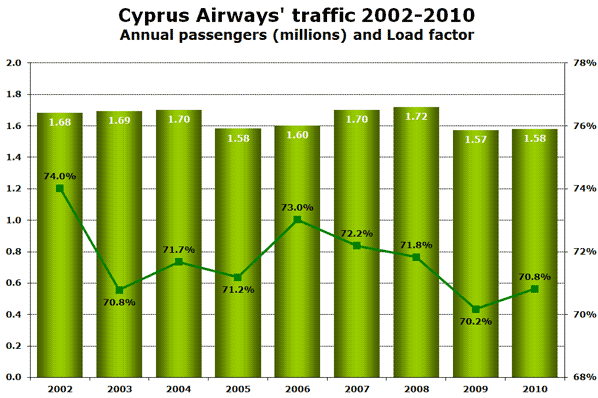 In the last nine years, Cyprus Airways has transported between 1.5 and 1.7 million passengers annually. In 2010, the airline’s passenger count marginally grew on the year before, in spite of a 14% fall in April caused by the Icelandic volcanic ash cloud closing air space in some of Cyprus Airways’ key markets. The 2010 performance is, however, still a fall of 8% compared with the airline’s peak in 2008.

Traffic is highly seasonal and the airline last year transported 2.5 times more passengers in the peak month of August than in off-peak February.

This coming August, currently released schedule data shows that Cyprus Airways will be the largest airline in the Cyprus market with a 21% share of seat capacity. Last August, the airline’s share was 27%, in spite of then also competing with now defunct Eurocypria and low-cost carrier Blue Air, which now has pulled out of its Larnaca base.

Split by airport, Cyprus Airways will have 25% of the capacity at its base at Larnaca Airport in August, while it only ranks eighth at Paphos Airport, where its share only is 3%.

Cyprus Airways is now also under attack by Aegean’s Cyprus expansion, which involves six new Greek routes and a daily service between Larnaca and London Heathrow. This August, Aegean Airlines will rank second after Cyprus Airways in Larnaca, offering almost half as much seat capacity as the Cypriot national carrier.

In spite of the airline’s troubles, it has launched a new route and plans to start another this summer. In November 2010, the airline began serving Munich from Larnaca, initially once-weekly non-stop and another weekly service operating via Vienna, then moving to Zurich. From the start of the summer season next week, both flights will operate non-stop. In July this year, Cyprus Airways will also launch weekly flights to St Petersburg.

Both of the airline’s new routes were previously served by now defunct Eurocypria, but Cyprus Airways also competes with airlines from the other end of the routes. From Munich, Condor operates twice-weekly and Lufthansa four times a week. Rossiya’s flights between St Petersburg and Larnaca even operate as often as daily. Cyprus Airways also has the operational disadvantage of not being able to operate in Turkish air space, which particularly increases the airline’s costs for its Russian operations.

20% capacity cut as network is redistributed 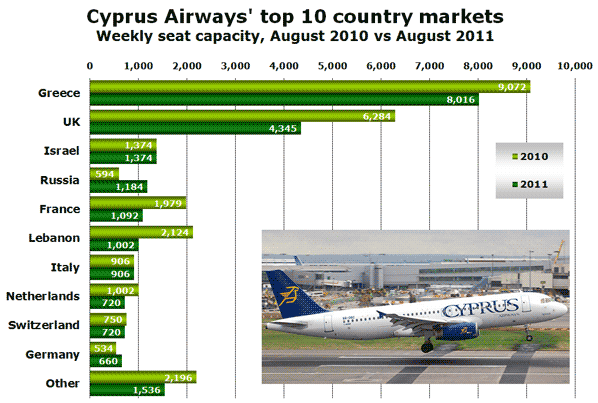 When comparing the schedule for August this year with the same week last year, Cyprus Airways has decreased in almost all country markets. Capacity as a whole is down by 20%. The airline’s second-largest market, the UK, has seen seats cut by more than 30%. The French and Lebanese markets have been approximately halved.

The two markets beating the trend are the two that have seen new routes launched; Russia, which gets double the capacity with the new St Petersburg route to complement Moscow services, and Germany, which is up 24% because of the new Munich service.

Three country markets have been dropped altogether in the last year; Egypt, Saudi Arabia and Jordan, each of which had two weekly flights last summer.