Camair-Co CEO Alex van Elk and the Minister of State for Transport, Bello Bouba Maigari, addressed guests celebrating the launch of Camair-Co’s operations, ahead of the inaugural flight from Douala to Paris CDG, via Yaoundé. 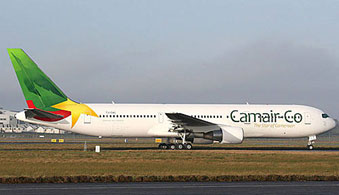 This week saw the launch of a new national airline for Cameroon in Africa. Camair-Co has begun operations from Douala airport with a single 767-300 (with 210 seats including 30 in Business class) and a single 737-700, configured with 128 seats including 12 in Business class. According to the airline’s website, the route network comprises double-daily domestic flights to Yaoundé (morning and evening) and a mid-day flight that goes from Douala to Garoua, Garoua to Maroua, and finally from Maroua back to Douala. This flight operates three-times weekly. There is also a three-times weekly service from Douala to Garoua, Garoua to Ndjaména (in Chad), and Ndjaména back to Douala. These flights are operated by the airline’s 737.

Lufthansa Consulting has been involved in the formation of the airline and Lufthansa Technik will provide line maintenance. The CEO is Alex van Elk, COO Matthijs Boertien, CFO Roy Harrypersad, and CCO Christian Perchat. Prior to joining Camair-Co, van Elk was Managing Director of Arik Air in Nigeria, and before that was CEO of Weeze Airport in Germany. Boertien was formerly CEO of Denim Air in the Netherlands and helped launch Amsterdam Airlines. Harrypersad was previously CFO at both Caribbean Airlines and DHL Express Americas. In total, the airline currently employs 330 people.

Douala is already connected non-stop to three European hubs; Brussels, Paris CDG and Zurich thanks to Brussels Airlines (three flights per week), Air France (daily) and Swiss (four flights per week). All three of these carriers also operate to Yaoundé, the country’s capital.