WindJet is launching 12 routes – 10 of which are international – from its new base, which was opened this week in Rimini on Italy’s Adriatic coast. The airport named after its famous film director also serves the small nearby country of San Marino. 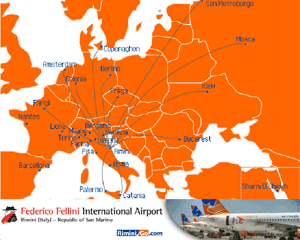 Italian LCC WindJet, which began operations as long ago as June 2003, has selected Rimini as its latest base. Starting this week the carrier is launching 12 new routes across Europe using its fleet of A319s and A320s; two domestic routes (to Catania and Palermo) and 10 international routes. Although only two of the 12 destinations are domestic, they account for well over 50% of all flights from Rimini, with Catania served twice daily and Palermo daily. All of the 10 international routes are served just once or twice per week.

The 10 international routes are spread across eight countries and are primarily aimed at attracting inbound tourists to Italy’s east coast.

Last year, Rimini’s Federico Fellini Airport (who else but the Italians would name an airport after a legendary filmmaker) handled almost 550,000 passengers, which represented growth of 45% over the previous year. New routes at the airport in 2010 included twice-weekly Ryanair flights from Liverpool, the return of several airberlin routes from various German airports and double-daily flights to Rome with Darwin Airline, the Swiss carrier that recently took control of Geneva-based Baboo.

According to airberlin’s website, its only non-stop flights to Rimini this summer are from Karlsruhe/Baden-Baden, Nuremberg and Stuttgart. All three of these routes operate weekly between mid-May and mid-September.